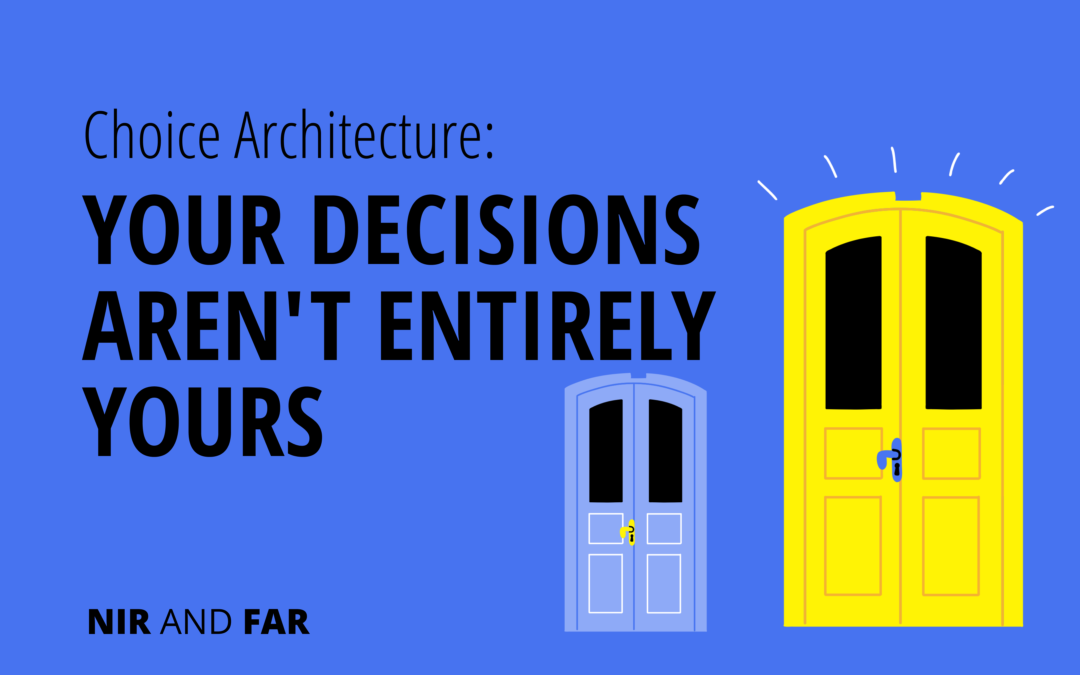 Nir’s Note: Eric Johnson teaches at the Columbia Business School where he is the Director of the Center for Decision Sciences. He has authored some of the most influential research on decision-making, with papers published in leading scientific journals and articles appearing in The New York Times, The Wall Street Journal, Business Week, and The Financial Times. His latest book, The Elements of Choice: Why the Way We Decide Matters, explains “choice architecture”–how the design and presentation of options influences consumer decisions.

Nir Eyal: Why did you write this book?

Eric Johnson: People have a vague sense that how choices are posed might influence them, but they lack a concrete awareness of how, exactly, they are being influenced. It turns out that the person asking you to make a choice has a lot more influence than you think. This influence is called choice architecture, and while it’s only had that name for a decade, I’ve been studying the science of decisions for almost 40 years. I wanted to write a book that would help people realize the power of choice architecture and use that power to see clearer how they can make better choices.

Why? Because we are all choice architects: we present options to our kids, spouses, bosses, and clients, but we often don’t know that how we present choices affect their decisions. I wanted to help folks design better choices for those around them and, incidentally, make them aware of how they are being influenced.

'People have a vague sense that how choices are posed might influence them, but they lack a concrete awareness of how, exactly, they are being influenced.' -interview with @ProfEricJohnson Click To Tweet

EJ: I realized how important choice architecture was when I started looking at people’s decisions to be organ donors. Changing what happened if they did not make a decision, what we call a ‘default’, had a huge impact on the number of people who were willing to become a donor. I think this is, in part, because people want to avoid making this particular choice; it is not pleasant to consider the scenario wherein this lifesaving choice is necessary.

What surprised me was how relevant the issue became, and several countries have changed the default as a result of the research. Another surprise, though, is that we really don’t know if it makes a difference in the number of actual donors. When countries change policies, they usually change other things, like publicizing donating, so there is no clear study. It also emphasizes that choice architecture matters and shifts throughout the process–most countries also ask the family for permission, which is another place where choice architecture seems to matter.

EJ: The question of how people should (and do) design behavior is why I wrote the book. I identify two ways that choice architecture changes what is selected. First, it makes us recall different things about the options we face, affecting how we assemble our preferences. Second, we choose to look and think about only a small set of all the information that we could look at. Choice architecture can change the path we pick. I hope that people consider how they might be a designer for the chooser they know the best–themselves. I want people to understand the scope of the tools they have available to help with those decisions.

EJ: I would dive deep into one of the fascinating examples I discovered. There are some great stories out there. Doing the detective work was a lot of fun and something that most academics don’t get to do. I did research into how choice architecture affected the high school choices of incredibly bright but disadvantaged New York 13-year-olds and their parents, how it affects people looking for love using online dating, and even how youngsters use RobinHood to trade stock options with sometimes tragic outcomes. It’s different from designing new studies or reading academic literature, and it was a great complement to writing.

NE: What’s one thing you believe that most people would disagree with?

EJ: Research shows that most people don’t think choice architecture affects them. The same research shows that it does, but they are not aware of it. We want to believe we are responsible for what we choose, but that’s not the whole story.

NE: How did writing the book change you?

EJ: I had never appreciated how magicians use psychology and choice architecture. It turns out there is a strong connection: good mentalists use some of the same principles that work in choice architecture! A good example is how they can influence something to be at the forefront of the mind. A good mind reader is actually a good mind writer.

EJ: I have been lucky enough to benefit from the magic of 401(k)’s, target date funds, and other choice architecture that helps me save money. I’m not particularly good at tracking my spending, so having money put into retirement savings automagically helps a lot. Unfortunately, those products are not available to everyone. Many people have no choice architecture for savings and are constantly deciding what to spend and what to save, and that makes it harder.

NE: What’s the most important takeaway you want people to remember after reading this book?

EJ: That there is no such thing as “no choice architecture.” Too often, people think that designers have a choice to nudge or not nudge, but that’s not the case. Take one of the decisions that choice architects must make: how many options to present to the chooser. Present too many options, and people scan the choice to save time and energy; they misunderstand the options and make bad decisions as a result. But if you present too few options, we might miss the best option for somebody. That design decision–how many options to even offer–is one that everyone must make.