Getting Over FOMO, the Fear of Missing Out Nir’s Note: This post is co-authored with Stuart Luman, a science, technology, business writer, and occasional FOMO victim who has worked at Wired Magazine, the Bulletin of the Atomic Scientists, and IBM.

“I wish that I could be like the cool kids,” goes the catchy hook for the hit song by Echosmith. The official video has been viewed over 132 million times on YouTube, perhaps tapping into something deeper than mere adolescent angst.

We all want to be like the cool kids.

FOMO, the “fear of missing out,” refers to the feeling of “anxiety that an exciting or interesting event may currently be happening elsewhere.” In 2013, the word and its definition were added to the Oxford English Dictionary. Today we have fomo stocks, fomo crypto and the debilitating symptoms of “major fomo”—but experiencing FOMO is nothing new.

Most people at one time or another have been preoccupied by the idea that someone, somewhere, is having a better time or leading a more exciting life. For those who skew towards such feelings, smartphones and social media have made it easier than ever to track what others are doing.

Of course, there is nothing wrong with wanting to keep tabs on people we care about. An important part of what makes us human is our need to be social. But recently companies have found ways to tap into this impulse to keep users coming back to their apps and websites habitually using what I’ve called the “Hook Model.”

Whether social media induces FOMO or simply makes it easier to indulge in our feelings is up for debate. It’s not surprising that something as new and transformative as this technology would have complex implications on our daily lives, both positive and negative.

Research on the Fear of Missing Out

A study in Computers in Human Behavior featured a series of ten statements such as “I get worried when I find out my friends are having fun without me,” and asked participants to rate themselves from one to five on how well those statements correlated with their own lives. The study found that three-quarters of respondents (mostly college-age students) experienced FOMO. Those who scored higher were more likely to report lower life satisfaction and use social media immediately before and after sleeping, during meals and classes, and to engage in dangerous behaviors such as texting while driving. In a 2018 study in the Journal of Social and Clinical Psychology, limiting social media decreased loneliness and depression in a group of 143 University of Pennsylvania college students, where half were assigned to cut their social media use to 30 minutes per day while the other half continued their normal usage. After 3 weeks, the limited use group had significantly lower levels of loneliness and depression compared to the control group, suggesting a causal link. Films like the 2020 docudrama The Social Dilemma have reinvigorated the controversy over the harmful impact of social media.

Not all studies reach such negative conclusions. One study found shy and depressive individuals benefited from increased social media use and online relationships. Likewise, a paper in the Journal of Computer-Mediated Communication found a positive correlation between college students’ use of Facebook and increased life satisfaction, civic engagement, and political participation.

It’s clear that we can’t yet fully grasp how new technologies affect our psyches. Regardless, it appears that they are here to stay. Therefore, it is up to us as users to figure out where, when, and how often to use these products and services.

How to Deal with FOMO Here are a few suggestions for keeping gadgets and FOMO in check. 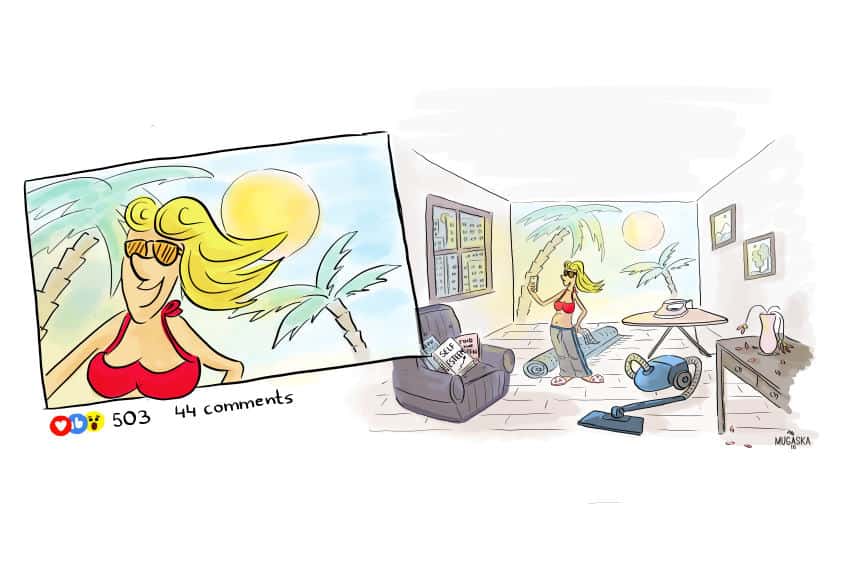 Clearly, what we see of others online isn’t a full representation of their lives. Instead, it’s personal social-media marketing, similar to the images of airbrushed models in fashion magazines that highlight and exaggerate only their most positive aspects. The inevitable disappointments, cringeworthy embarrassments, personal failures, and existential doubts are rarely seen in Facebook posts.

It’s also important to remember that most people experience FOMO to some degree and at some time. The uncomfortable emotion is normal and with the advent of social-sharing tools, increasingly common. However, understanding the feeling and finding positive ways to deal with it can help us be happier with our own lives without getting wrapped up in a fear that we might be missing out on what the cool kids are doing.

Clearly, what we see of others online isn’t a full representation of their lives. Click To Tweet

In researching this article we found these other good reads: