One Question to Help You Get More Done 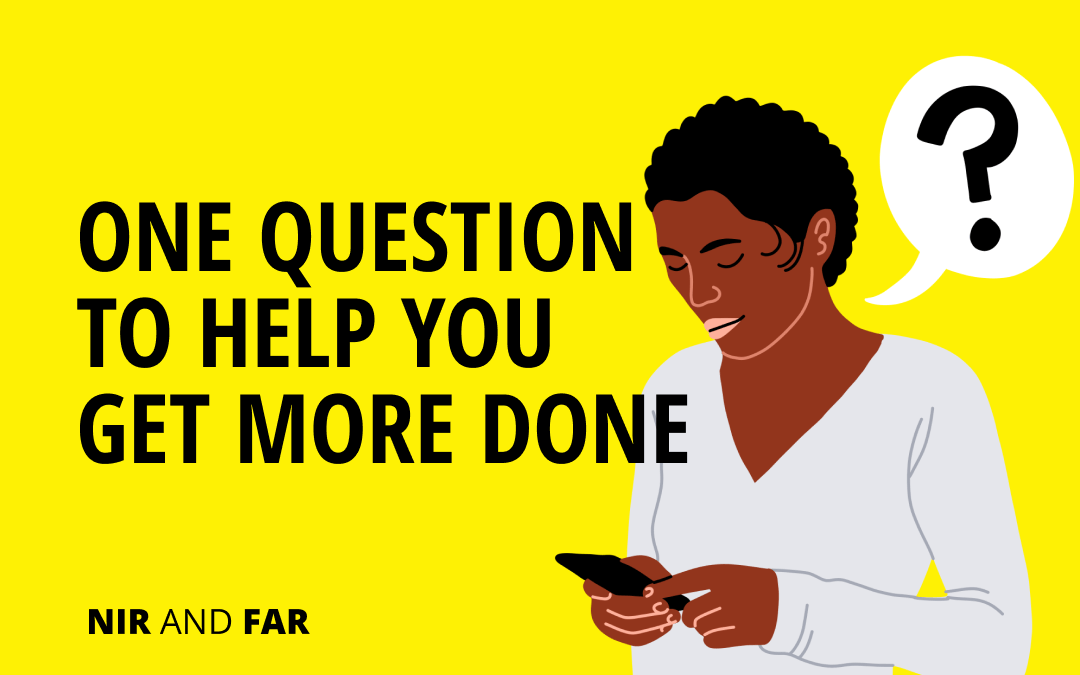 Struggling to stay focused? Knowing which external triggers serve you—and which ones don’t—can help you get back on track.

It was 9 a.m. and Wendy, a freelance marketing consultant, knew exactly what she needed to do for the next hour: be in her office chair to write new client proposals, the most important task of her day.

She fired up her laptop and opened the client’s file on her screen, eager to win new business. As she held her coffee mug with both hands and took a sip, a fantastic addition to the proposal entered her head. “This is going to be great!” she thought to herself.

But before she had a chance to write down the idea—“Ping!” Her phone buzzed with a notification.

Wendy ignored the intrusion at first. She jotted down a few words, but then the phone buzzed again with a different notification. This time her focus faltered, and she became curious. What if a client needed her?

She picked up her phone, only to find out that a trivial tweet by a celebrity rapper was reverberating through social media. After tapping out of the app, another notification caught her eye. Her mom had messaged her to say good morning. Wendy fired off a quick heart emoji to let Mom know she was fine.

Oh, and what’s this? There was a bright red notification bubble over the LinkedIn app icon. Perhaps there was a big business opportunity waiting? Nope. It was just a recruiter who’d viewed her profile and sent an introductory message.

Wendy was tempted to reply, but she remembered the time. It was now 9:20, and she hadn’t made any progress on her proposal. Worst of all, she’d forgotten the big idea she had been so excited to add to it.

“How did this happen?” she moaned to herself. Despite having important work to do, Wendy wasn’t getting it done. She was, once again, distracted.

Does this sound familiar?

These distractions aren’t caused by internal triggers, such as intrusive thoughts. They’re external triggers: cues that arise in your environment that prompt you to act, including notifications, pings, dings, alarms, and even other people.

External triggers are hard to ignore, but you can start to defend yourself by asking one question:

Is this trigger serving me, or am I serving it?

To understand why this question is so useful, let’s look a bit more closely at the effect external triggers have on us.

How external triggers affect you

When BlackBerry launched push email in 2003, users rejoiced; they didn’t need to constantly check their inbox for fear of missing important messages.

“When email comes, BlackBerry promised, your phone will tell you,” David Pierce wrote in Wired magazine in 2017. Apple and Google soon followed, making notifications part of their phone operating systems. “Suddenly, there was a way for anyone to jump into your phone when they wanted your attention,” Pierce continued. “Push notifications proved to be a marketer’s dream: They’re functionally impossible to tell apart from a text or email without looking, so you have to look before you can dismiss.”

Checking those notifications comes at a high price. External triggers can rip us away from the task we planned to do at that moment. Researchers have found that when people are interrupted during a task, they tend to subsequently make up for lost time by working faster, but the cost is higher levels of stress and frustration.

The more we respond to external triggers, the more we train our brain in a never-ending stimulus-response loop.

We condition ourselves to respond instantly. Soon, it feels impossible to do what we’ve planned because we’re constantly reacting to external triggers instead of attending to what’s in front of us. When this happens, we’re serving the trigger; it’s not serving us.

Perhaps the answer is to simply ignore the external triggers. Maybe if we don’t act on the notifications, phone calls, and interruptions, we can go about our business and quickly silence the interruptions when they happen.

A study published in the Journal of Experimental Psychology: Human Perception and Performance found that receiving a cell phone notification but not replying to it was just as distracting as responding to a message or call.

Similarly, the authors of a study conducted at the University of Texas at Austin proposed that “the mere presence of one’s smartphone may impose a ‘brain drain’ as limited-capacity attentional resources are recruited to inhibit automatic attention to one’s phone, and are thus unavailable for engaging with the task at hand.”

By having your phone in your field of view, your brain must work hard to ignore it. But if your phone isn’t easily accessible or visually present, your brain is able to focus on the task at hand. That’s why I recommend purging unnecessary notifications to hack back your concentration.

Not all external triggers are harmful to our focus. In many ways, we can use them to our advantage. For example, short text messages providing words of encouragement are effective at helping smokers quit (see also this habit tracker). A meta-study of interventions from ten countries found “The evidence provides unequivocal support for the efficacy of text messaging interventions to reduce smoking behavior,” according to an author of the study.

The trouble is, despite the potential benefits external triggers can provide, receiving too many can wreak havoc on our productivity and happiness. How, then, can we separate the good external triggers from the bad? The secret lies in the answer to the crucial question: Is this trigger serving me, or am I serving it?

This question helps you immediately identify what’s helpful and what’s not. From there, removing unhelpful external triggers is a simple step toward staying focused and getting more done. (Here’s my complete guide to distraction-proofing your phone.)

When I challenged Wendy, the marketing consultant struggling to stay focused, to ask herself the critical question, it empowered her to start putting unhelpful external triggers in their place. She could begin to decide for herself which triggers led to traction instead of allowing her attention to be controlled by other people.

Viewing external triggers this way, we can treat them like what they are: tools.

If we use them properly, they can help us stay on track. If a trigger helps us do the thing we planned to do in our schedule, it’s helping us gain traction. If it leads to distraction, then it isn’t serving us.

Asking the critical question is an important step to becoming Indistractable.

Nir’s Note: This essay was adapted from my book, Indistractable: How to Control Your Attention and Choose Your Life.