How to (Finally) Put an End to Pointless Arguments 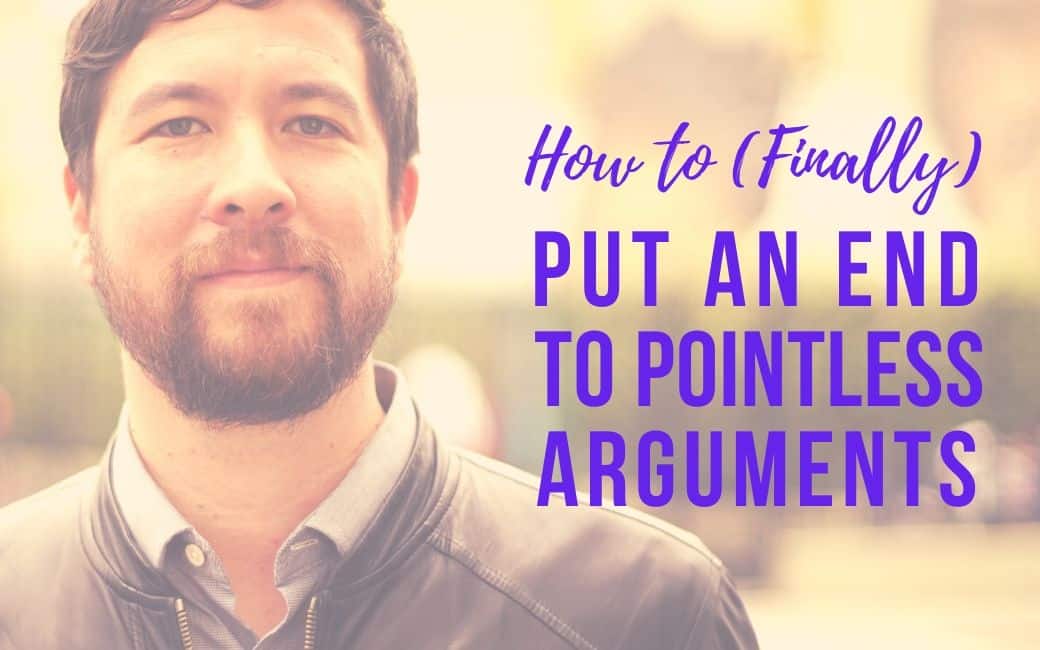 Count me as a Buster Benson fan. His 2016 Cognitive bias cheat sheet is legendary among behavioral designers. I have a framed print out of his codex in my home and I’ve enjoyed his writing on various topics for years. He has extensive experience building products that move people at Slack, Twitter, and Habit Labs. 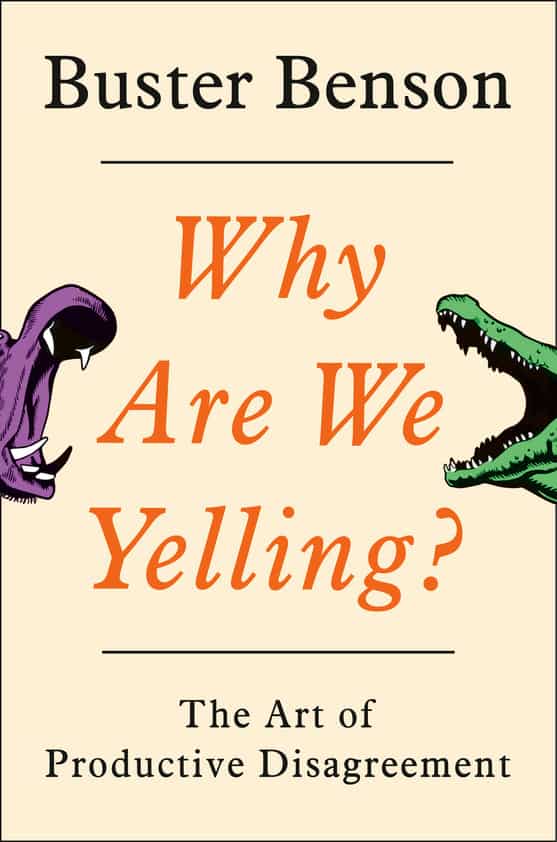 With the release of his new book, Why Are We Yelling? The Art of Productive Disagreement, I suspect many more people are about to become Buster Benson fans. His book is a beautifully written and illuminating look into why we so often fight with the people we love. It’s a guide for productive disagreement. Benson argues that conflict need not be unpleasant and if done right, can lead to greater understanding and cooperation.

Could there be a more timely and needed book for our disagreeable times?

Buster Benson: TLDR; I wrote this book to learn how to survive today’s world without going insane.

I’ve been working in tech at places like Amazon, Twitter, and Slack, as well as a few of my own startups, for over 20 years. I’ve always been drawn to this question of how can we change ourselves for the better, because I sincerely believe that the only way to change the world for the better is to start with ourselves.

2016 was a big turning point for me, and for a lot of people. I had always suspected that the world’s steady march towards progress was a bit bumpy, but was at least guaranteed to trend upward. It was easy to cite high level stats like literacy rates, poverty rates, unemployment, having basic needs met, etc, to show that the world was getting better even if it kept feeling worse. But it’s now becoming obvious to more and more of us that there are some other pretty dark threads weaving into our timeline that we would be unwise to ignore (I also feel ashamed about not spotting some of these much earlier, as a willfully blind member of the privileged class).

Problems like income inequality, mental health, gender and race-based harassment, climate change, and anxiety are all well past boiling over and are even bringing our average life expectancy down in the US. Our political discourse is completely dysfunctional, both in the US and beyond. Our media, broadcast, and social networks are falling on their faces as they attempt to stay ahead of our shifting expectations of them. Things just feel extremely unright on so many levels.

Like many product managers and entrepreneurs in our industry, I’m a fan of looking for root causes of problems rather than settling for the naive answers. The naive answer here is that people are just idiots, and everything is doomed. I can’t resign myself to hatred, cynicism, and futility. I’ve always been interested in taking on the discomfort of learning difficult truths and acknowledging when a blind spot has been hiding something from me. We’re all complicit in the problems around us. The least we can do is to try to use our energy to make things a tiny bit better, rather than worse.

How we argue and how we communicate with people who hold perspectives we find to be deeply wrong seems to me to be at the very heart of many of these problems. We’re arguing at the starting line of so many debates, when we should be racing to fix problems despite differences of opinion. What are we missing in the formula to having more fruitful disagreements?

Most people tell you to write a book about what you know. I’ve had a career that has put me in the middle of resolving disagreements for several decades now, but I have to admit that when I came to this book it wasn’t because I had all the answers, but exactly the opposite: I deeply needed these answers, and didn’t know how or where to find them.

BB: There was a quick cascade of “aha moments” early in my exploration of this topic. I thought my goal was to help people make their unproductive disagreements more productive. But time and again I found that the real problem was that people everywhere are avoiding disagreements entirely.

Many of us have already given up on the idea of the productive disagreement, and think anyone trying to have one is really just trying to trap us in some kind of sales pitch or false promise that will end up being a waste of time. Early on I tried forming a few groups that would discuss topics with lots of moderation to prevent them from going off the rails. Nobody wanted to do this. In hindsight it makes sense… we’re burned out, tired of ranting, and out of ideas.

BB: I don’t have any “secret keys” in this book, but I do have 8 “things to try” which are the result of pulling together all kinds of experts from a bunch of different fields: cognitive psychology, game theory, communication, behavior change, mindfulness, and more. The 8 things to try are:

(Look inside the book)

Each of these is about a small change we can bring to our everyday arguments and doesn’t require you to become fully in control of your emotions, or to become a perfect persuader. In fact, those skills can get in the way.

The real lesson I hope people take away is that we have everything we need to have more productive disagreements… we just need to practice the art more deliberately, and give ourselves and others forgiveness when we fail, and new opportunities to grow. That’s the only way we’ll get a true felt understanding of what a productive disagreement is, and it’s only then that we can begin to expect it of our leaders and elected officials as well.

BB: I follow the tips in Indistractable of course! I’m not just trying to flatter here. True story: when I read your book, I found more than a few parallels between improving our ability to stay on track with the art of productive disagreement.

The first step is always to notice the first trigger — perhaps this comes from our shared background in behavior change, but both of us talk a lot about that initial spark of anxiety that causes us to run a habitual program in our brains. It’s not always possible to notice when this happens, but when I find myself particularly distractable I know that there’s some part of my brain that is trying to do something it considers important.

I start most days with a long walk (from my house to the desk I rent about 2 miles from my house) and this is one of the times when all those distracting thoughts can have space to speak their mind. If that’s not enough I also run 750words.com (turning 10 next month!) which is place to do morning pages and brain dump everything that needs to be dumped out. I’ve found that trying to just shut up those thoughts rarely works. I do what I can to just get them all out, do all those 2-minute tasks that I’ll spend way more time delaying than just doing, and then move on to what I really want to focus on.

NE: What’s one thing you believe that most people would disagree with?

BB: I have a beliefs file that I’ve kept for 7ish years: There are all kinds of things in there that I’m sure most people would disagree with. If I trotted all of them out here, people would seriously reconsider buying a book from a complete crazy person, but I’ve tried to defend a couple in various venues like changeaview.com and letter.wiki (two of my favorite sites on the internet). Here’s a fun one: We are better understood as a collection of minds in a single body rather than as having only one mind per body.

BB: I have a bunch that I feel have helped me tremendously throughout life, like private journaling, having a very low bar for reading self-help books (and not feeling bad if I don’t finish them), and being okay with drinking lots of coffee and staying up too late.

The one I feel has contributed most to my well-being in the long term is gonna sound weird, but it’s “talking to myself kindly and directly”. The habit of viewing self-critical thoughts as “feedback” rather than “truth” has (at least in my confabulated narrative of the self) improved my ability to learn from every mistake and misfortune in a way that has had pretty solid compound effects over time. I consider this skill to be different from plain overconfidence.

The difference is that I don’t have a louder voice in my head saying that everything I do is always good and right, but rather have some way to hear my thoughts as you might hear an untrustworthy narrator during a movie. It’s always worthwhile to get a second opinion (usually from someone else’s head).

NE: Are you working changing any bad habits?

BB: Yeah, always. Right now I’m trying to avoid eating too many hamburgers, because I love them so much, and yet tend to gain an extra 10-15 pounds if I do this too often. I recently took up intermittent fasting (with a 12pm-8pm eating window) and it has helped a lot. When noon comes around, I’m just as hungry for a giant salad as I am for a hamburger.

BB: Once you’re introduced to the art of productive disagreement, start practicing. Don’t start with the hardest disagreement first… think of it like the onboarding to a new game or sport, find some easy ones to calibrate your comfort level, then as they get easier stretch to more difficult ones. Conversation and disagreement is one of the oldest social skills we have… we’re remarkably equipped to find flow in a conversation once you start to look for it and notice it.

To find flow, get to know your own strengths and weaknesses, and when you find an opportunity to hop into a conversation that will push you a little past your comfort zone, that’s your opportunity to grow. Be kind to yourself if it takes a little longer, or feels a little harder than you thought at first. Learn what you can from the interaction and try again.