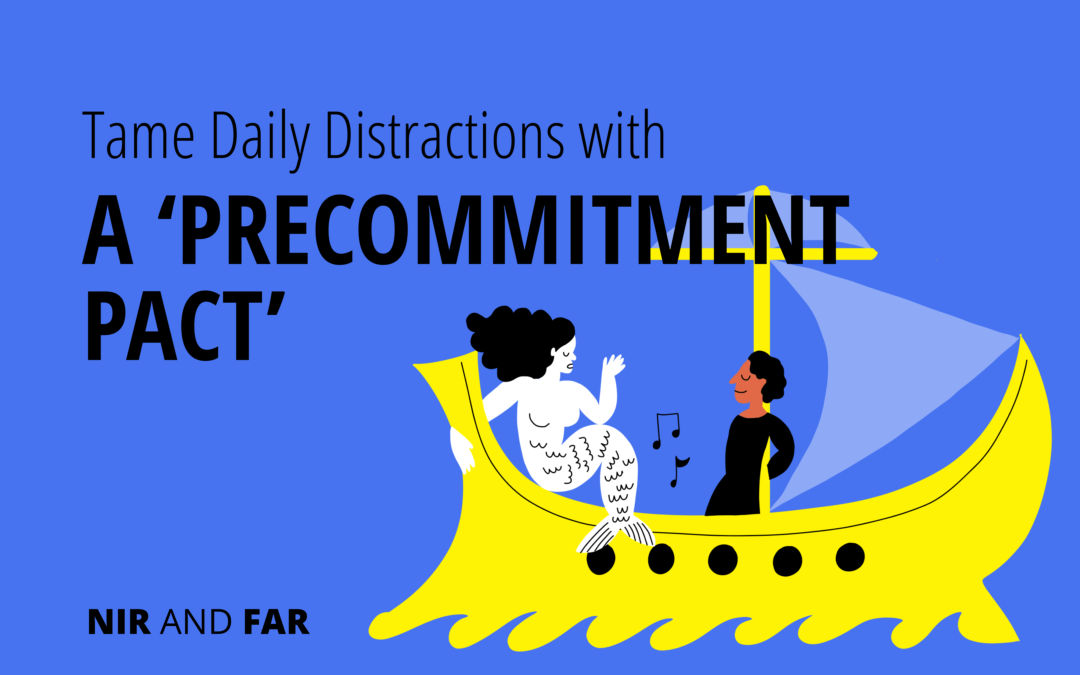 From Homer to Franzen, productive people lean on precommitments as a proven way to stick to their goals.

Famed director Quentin Tarantino “never use[s] a typewriter or computer.” He prefers to write screenplays by hand in a notebook.

Pulitzer Prize-winning author Jhumpa Lahiri writes her books with pen and paper, then types them up on a computer without internet.

These methods may seem extreme, but desperate times call for desperate measures. These luminaries understand that focus requires not only keeping distraction out, but also keeping ourselves in—learning to practice self-restraint when we would otherwise fall off track.

The Power of Precommitment

A precommitment involves removing a future choice, as a way to overcome impulsivity. It’s a key step on the path to becoming indistractable.

Although researchers are still studying why the technique is so effective, precommitment is one of the oldest tricks in the book. Perhaps the most iconic precommitment in history appears in The Odyssey. In that epic poem, Odysseus (a.k.a. Ulysses) must sail his ship and crew past the perilous land of the Sirens, who sing a bewitching song known to attract sailors. When sailors approach, they crash their ships into the Sirens’ rocky coast and drown.

Knowing the danger ahead, Ulysses hatches a clever plan. He orders his men to fill their ears with beeswax so they can’t hear the Sirens’ call. Everyone follows Ulysses’ orders with the exception of Ulysses himself, who has resolved to hear the beautiful song.

Ulysses knows, however, that he’ll be tempted to either steer his ship toward the rocks or jump into the sea to reach the Sirens. To avoid this fate, he commands his crew to tie him to the mast of the ship and instructs them to neither set him free nor change course until the ship is in the clear—no matter what he says or does. 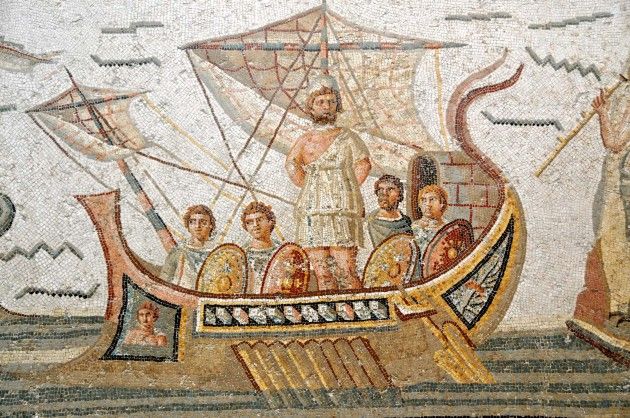 Ulysses bound to the mast of his ship

The crew follows Ulysses’ commands, and as the ship passes the Sirens’ shores, he is driven temporarily insane by their song. In an angry rage, he calls for his men to let him go, but since they can hear neither the Sirens nor their captain, they navigate past the danger safely.

That’s where we get the term Ulysses pact, which is “a freely made decision that is designed and intended to bind oneself in the future.” It’s a type of precommitment we still use today.

For example, we precommit to advanced healthcare directives to let our doctors and family members know our intentions, should we lose our ability to make sound judgments. We precommit to our financial security by depositing money in retirement accounts with steep penalties for early withdrawal, to ensure we don’t spend funds we’ll need later in life. We value the fidelity that’s promised in a lifelong relationship bound by the contract of marriage.

Such precommitments are powerful because they cement our intentions when we’re clear-headed and make us less likely to act against our best interests later.

Just as we make precommitments in other areas of our lives, we can use them in our counteroffensive against distraction.

Inventors David Krippendorf and Ryan Tseng came up with a simple way to stop their unwanted habit of late-night snacking on indulgent foods. Their device, Kitchen Safe, is a plastic container equipped with a locking timer built into the lid.

Placing tempting treats (like Oreo cookies—my personal favorite) in the container and setting the Kitchen Safe timer locks the container until the timer runs out. Of course, I could smash the container with a hammer or run out to buy some more cookies, but that extra effort makes those choices less likely. Krippendorf and Tseng’s concept was so compelling that it scored a deal on the reality show Shark Tank, and the product now has nearly four hundred five-star reviews on Amazon.

Kitchen Safe is an example of a precommitment. Specifically, it demonstrates the usefulness of an effort pact: a kind of precommitment that involves increasing the amount of effort required to perform an undesirable action.

An effort pact prevents distraction by making unwanted behaviors more difficult to do. Lots of products and services have been developed to help us make effort pacts with our digital devices. Whenever I write on my laptop, for instance, I click on the Freedom app, which blocks my access to a host of distracting websites, including Facebook and Reddit, along with my email account. I can set it to block these sites for as much time as I need. (I typically choose forty-five-minute or one-hour increments).

Forest, perhaps my favorite distraction-proofing mobile app, is one I find myself using nearly every day. Every time I want to avoid getting distracted on my phone, I open the Forest app and set my desired length of phone-free time. As soon as I hit a button marked “Plant,” a tiny seedling appears on the screen and a timer starts counting down.

If I attempt to switch tasks on my phone before the timer runs out, my virtual tree dies. The thought of killing the little virtual tree adds just enough extra effort to discourage me from tapping out of the app—a visible reminder of the pact I’ve made with myself.

Apple and Google are also joining the crusade against digital distractions by adding effort pact capabilities to their operating systems. Apple’s iOS allows users to schedule time constraints for certain apps through its “Downtime” function. If users attempt to access a listed app during hours that they specify, the phone prompts the user to take an additional step in order to confirm that they want to break their pact to access it. Newer versions of Google’s Android come with “Digital Wellbeing” features that provide similar functionality.

Adding a bit of additional effort forces us to ask if a distraction is worth it. Whether with the help of a product like Kitchen Safe or an app like Forest, effort pacts aren’t limited to those we make with ourselves.

Precommitments Are Even Better With a Friend

Making pacts with other people is one of the best ways to stay committed.

In previous generations, social pressure helped us stay on task. Before the invention of the personal computer, it was obvious to the whole office when we were procrastinating at our desks. Reading a copy of Sports Illustrated or Vogue or recapping the details of our long weekend while on the phone with a friend sent clear signals to our colleagues that we were slacking off.

In contrast, few people today can see what we’re scrolling through or clicking on while at the office. Hunched over our laptops, we find ourselves checking sports scores, news feeds, or celebrity gossip headlines throughout the workday. To outsiders, this looks no different from performing competitor research or following up on sales leads. Disguised by unseen screens, the social pressure to stay on task disappears.

It gets worse when we work remotely. Since I tend to work from home, I find it all too easy to get off track when I know I should be writing. Perhaps bringing back a bit of social pressure when I’m having trouble staying focused could be helpful?

I put that question to the test and asked my friend Taylor, a fellow author, to cowork with me. Most mornings, we sat at adjacent desks in my home office and agreed to work in timed sprints of forty-five minutes. Seeing him hard at work and knowing he could see me, particularly at times when I found myself losing steam, kept me doing what I intended. Scheduling time with a friend for focused work proved to be an effective way to commit to doing what mattered most.

But what if you can’t find a colleague with a compatible schedule? When Taylor went away to speak at a conference for a week, I needed to recreate the experience of making a pact with another person.

Thankfully, I found FocusMate.com, which facilitates pacts with a video conferencing service. They paired me with a Czech medical school student named Martin. I knew Martin would be waiting for me to cowork at our scheduled time, and I didn’t want to let him down. While he was hard at work memorizing human anatomy, I stayed focused on my writing. To discourage flakiness, users are encouraged to leave a review of their focus mate. I loved Focusmate so much I decided to invest in the company.

Make a Precommitment—You’ll Be in Good Company

Since the dawn of recorded time, people have made precommitments to maintain traction toward their goals. Get inspired by Homer, Quentin Tarantino, or the Kitchen Safe team, and you’ll find yourself in a pretty great club of indistractable pact-makers.