Can We Please Stop Calling Everyone “Addicted”? 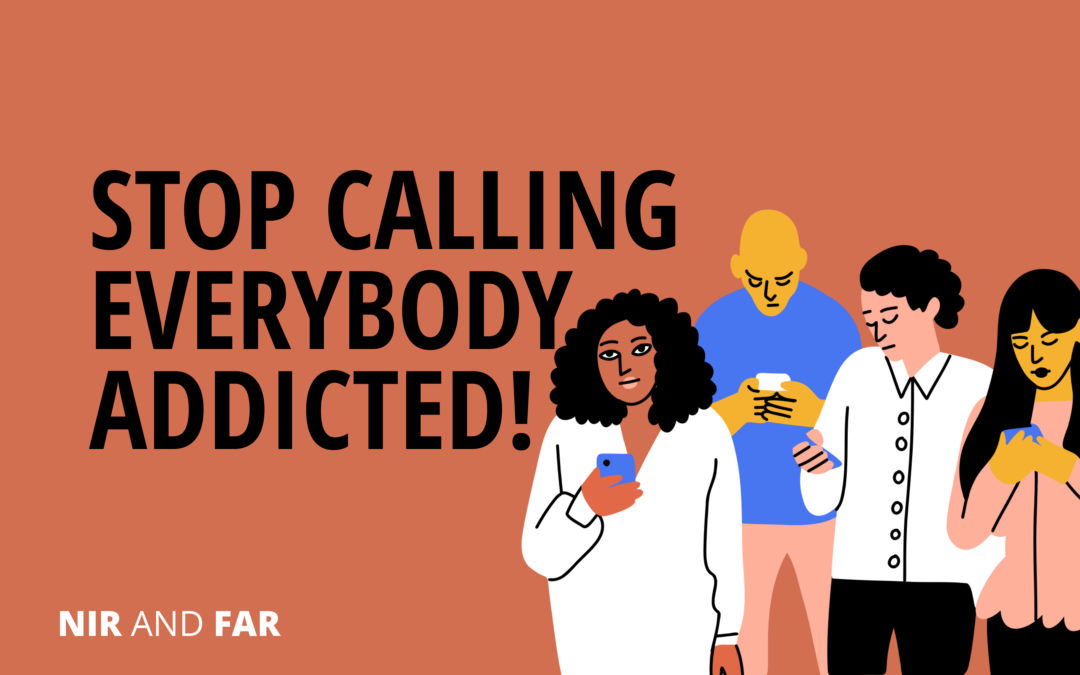 In my review of The Social Dilemma, I challenged the filmmakers’ rather extreme view that huge swaths of people are “addicted to technology,” that social media is like a dangerous drug that’s hijacking people’s brains, and that big tech companies are trapping people in something akin to The Matrix movie.

In response, I got some colorful comments, such as (paraphrasing): “Nir, check your intellectual privilege: you and I are smart enough to escape the trap of social media, but everyone is addicted, and it’s destroying the world.”

There are some big problems with this line of thinking with real consequences.

1. Saying everyone is “addicted” spreads disinformation.

The overwhelming majority of social media users are NOT pathologically addicted.

As several studies have demonstrated, addiction is much more than the thing people get addicted to. Studies have found that when lab rats are taught to self-administer alcohol, only 15 percent end up preferring booze to sugary water. Interestingly, that’s the same proportion of the human population that suffers from alcoholism.The overwhelming majority of people can play blackjack without ever becoming gambling addicts, can have sex without ever becoming sex addicts, and can have a glass of wine with dinner without ever becoming alcoholics. The same is true of social media, video games, and other tech.

2. Describing people as “addicted” is disrespectful.

There’s clearly something unique about people who compulsively abuse a behavior or substance to the point where it causes them harm.

Addiction is a serious disease that can have horrible consequences on people’s lives. Yet, somehow many people feel they can call other people “addicted” without any sort of diagnosis or qualifications.

When we make these careless blanket statements, we’re trivializing an illness.

It would be insensitive to talk this way about epilepsy or Tourette’s syndrome, so why do we do it with the disease of addiction? Calling people “addicted” to one thing or another without qualification is inaccurate and ignorant. It clouds our understanding of the real problem of addiction and gets in the way of solving that problem for people who are truly suffering from it.

3. Accusing people of being “addicted” is degrading.

This is the most disturbing aspect of the “everyone’s addicted to technology” trend.

If you believe everyone is addicted to technology, then you have a convenient rationale for discounting their ideas and actions. After all, being “addicted” is an impairment in decision making and judgment.

Isn’t it remarkable that some people think a sizable portion of the American population voted against their preferred presidential candidate, not because they might have had good reasons to do so, but rather (it is claimed) because they were mindlessly manipulated by social media?

If we want to better understand people we may disagree with, that attitude will get us nowhere.

Rather, we can acknowledge that reasonable people can disagree and not wave away their views with a pathology they don’t have.

Saying, “Oh, they believe those things because they’re addicted to social media,” is an easy way to avoid thinking about the real motivations for their actions. It’s an excuse for failing to empathize—for failing to even try to empathize.

4. Labeling is disempowering, for you and them.

When we mislabel other people as “addicted,” we remove their agency. We tend to think people are powerless to resist an addiction and therefore we place that (incorrect perception) on others.

For instance, calling your teenager “addicted” to video games removes their agency to do something about the problem. It also conveniently absolves you as a parent from doing the work of figuring out what your child is running away from in the offline world when they escape online.

This sort of thinking is also bad for people who see themselves as having a pathology they don’t suffer from.

When you tell yourself you’re “addicted,” even though you’re almost certainly not, you disempower yourself, and that likely causes more troubles than the technology itself.

How can this be?

A recent study found the perception of spending too much time using smartphones is correlated with poor mental health, while the actual amount of time spent on phone is not.

Just as it’s not okay to think of other people as addicted when they’re not, it’s unhelpful to see yourself as helpless. The reason is that the “I’m addicted” self-talk becomes a self-fulfilling cycle–by believing you’re helpless to resist tech, you do nothing about the problem.

We are more powerful than the tech companies.

Ironically, when we believe the narrative perpetuated by movies like The Social Dilemma, we do exactly what the tech companies want: nothing.

We complain, wring our hands, and take no steps to moderate our own behavior. This is a huge missed opportunity.

I’ve spent the bulk of the last ten years researching and writing about the psychology of technology and distraction in two bestselling books: Hooked and Indistractable. I’ve learned that the vast majority of us have the power to change if we do something about the problem of overuse rather than writing it off as an “addiction.”

By understanding most people are not “addicted,” but rather perhaps “distracted,” we can empower ourselves and others to take action right now to hack back.