Good or bad, our feelings color how we see people.

In psychology, a “trapped prior” is a perception of reality that’s colored, or trapped, by past experiences.

If not treated, trapped priors can turn into debilitating phobias. For instance, someone might have an overwhelming fear of dogs because they were bitten as a child.

Though not nearly as extreme, our trapped priors can shape how we perceive others.

Have you ever known someone you just couldn’t stand, but didn’t really know why? Maybe it was some slight offense that turned you off to them and now you get uneasy every time they’re around.

There’s a well-known meme for this phenomenon. It’s known as the “bitch-eating-crackers effect.” No matter what that person does, it can’t be good. “Look at Veronica over there; look at how she’s eating those crackers… what a bitch!” Of course, Veronica is probably perfectly harmless, but still!

The reverse is also true. We oftentimes treat people who make us feel a certain way better than they deserve. Several studies have shown good-looking people get better service, make more money, and are more likely to succeed in their careers.

We treat people better or worse because of how they make us feel and our feelings are highly influenced by our priors.

Trapped priors exist because your perception of the world doesn’t start with a blank slate every time you open your eyes. Rather, perception is a process of organizing and interpreting incoming sensations. This process is heavily rooted in past experiences—patterns you’ve seen and mapped to what’s happening now.

The best way I’ve found to understand this is using an optical illusion. Take a look at the chessboard below, and notice how the square labeled “A” looks darker than “B”:

In reality, those two shades of gray are identical. Take a look at what happens when I remove the context that’s creating the perception of two different shades: 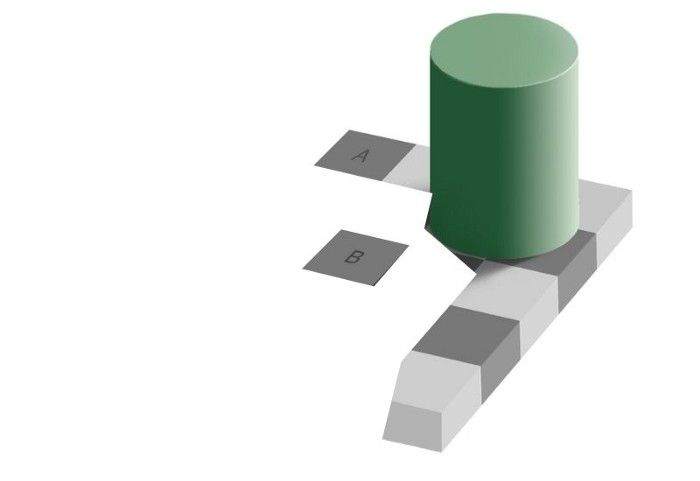 Our past experiences with these patterns make us see things not quite as they are, but as we expect them to be.

Now, back to real life. For some years after I reached adulthood, my trapped prior perceptions of my parents created friction between us. It felt to me like every time I visited my parents, I became a teenager again—and not in a good way.

Even though I was now independent, I’d get into dumb arguments with my parents just like I did when I was in high school. Why? There was no reason to argue about small differences of opinion. We were all adults.

After I had a child of my own, I grasped what was happening. My childhood experiences of my parents were coloring my adult reality. Even though I was grown up, whenever I was around my parents, part of me was still thinking about myself as a kid. A pattern or expectation from the past was causing me to see conflicts that weren’t really there.

It’s like the optical illusion: my view of the present was trapped by past experiences.

In relationships, it’s good to be able to let go of these trapped priors. It would be nice if we could treat our trapped prior perceptions of people the way we treated that optical illusion: wipe away the part of the picture that’s creating bias.

Getting rid of the “bitch-eating-crackers” variety of trapped priors is a bit less straightforward. However, it is possible to do something about it. If you take action, you can open up the path to forgiveness (or, at least, less bickering).

There are two things you can do to refresh trapped perceptions of people:

By the way, the best thing about learning to release trapped priors is that you can also release your harmful perceptions about yourself. Many people miss out on the chance to be truly productive simply because at some point in the past, they decided they were incapable, or learning to be more productive just wouldn’t work for them.

In reality, each day is a chance to take ownership of your time and spend it the way you want. By letting go of past perceptions of what you can or can’t do, you’re treating yourself with kindness and giving yourself a better chance to thrive.

WHAT ARE YOUR CORE VALUES?

REVEAL THE ATTRIBUTES OF THE PERSON YOU WANT TO BECOME