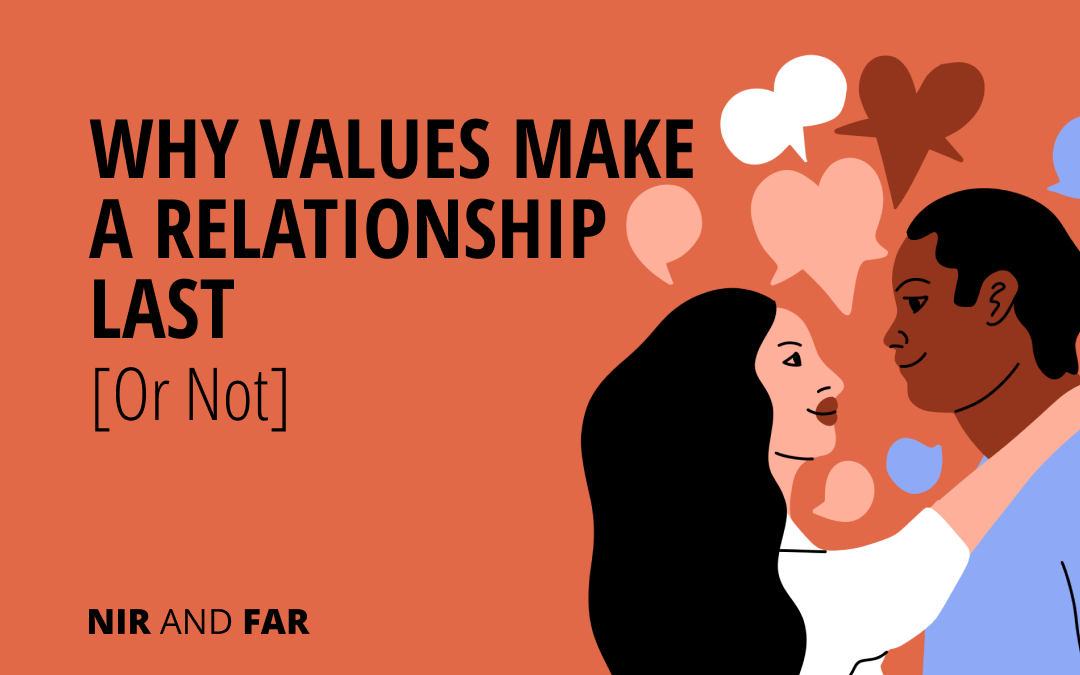 You don’t have to agree on everything, but you do have to align values in a relationship.

Divorce sucks. My friend is going through one right now. The worst part is that he saw it coming. And he’s not the first of my friends to tell me they ignored the warning signs of an eventual breakup.

Although there isn’t a surefire way to predict which relationships will last, there are some guidelines anyone entering or in a committed relationship should be aware of. They involve having honest discussions to make sure you’re seeing eye to eye with your partner about hot-button issues.

In my friend’s case, the topic of having kids unraveled his relationship.

When this couple first got together, they were both wishy-washy on having children and decided to avoid the topic until the right time. They were in no financial position to have children anyway, so why worry about it, they thought.

Today, they’ve built a successful business, but their relationship is over.

I only get to hear my friend’s side of the story, but from what he tells me, there was always a misalignment of values.

Our values are part of our identity. They are infallible characteristics of the person we are and want to become.

My friend values being a father. His wife values the freedom of life without kids.

For a long-lived relationship, couples don’t necessarily need to agree on everything, but they need to be aligned on their values.

Before knowing what values to look for in a partner, you must be honest with yourself about your own.

When we define values as attributes of the people we want to be, we can more easily prioritize what matters most to us.

But few people can rattle off their values. To help, I’ve made this list of the 20 common examples of values.

From that list, choose the top five values that embody the traits of the person you want to be. Feel free to add values that may not be on the list to your inventory. There are many others that may be important to you.

It may help you to assign these values to the three domains of life: you, your relationships, and your work.

These three domains describe where and with whom we live out our values. Most importantly, they give us a structure we can use to plan. They help us take control so that the way we spend our time becomes an authentic reflection of the person we want to be.

Once you’ve identified your values, take a look at your schedule. Do you make time in your week to live out those values?

For example, if one of your values is to be generous, do you make time to live out that value by regularly volunteering, donating money to those in need, or doing something else to give back?

If not, your value might be more of an aspiration, and it may be time to get real. Either make time in your schedule to live out your values or be honest with yourself that the values you’ve identified aren’t as important to you as you thought.

A bit of self-reflection makes sure you don’t make demands of your partner that you’re not willing to back up with action yourself.

Now, fitness isn’t a required value. But if you do value it, you can’t expect your spouse to try to stay in shape while you only provide lip service. Don’t be a hypocrite.

Align Around These Relationship Values

While falling in love, people tend to minimize their differences and maximize their similarities. But if a relationship is to last, we have to make a point of discussing our values with our partner.

Some values are more foundational for romantic relationships than others. Here are some values that you would be wise to discuss with your partner.

My friend going through the divorce wishes he would have discussed this value with his now-wife sooner.

Is one of your values to become a parent? Some people feel strongly about having biological children; others embrace the idea of adopting, acting as a foster parent, or having no kids at all. Some may want biological children, but only one or two, while others want large families.

It can be challenging to know if you want children later in life when you’re young. But your romantic relationship will have the best chance of succeeding if you do the work to explore your wishes and communicate them with your partner. Don’t just wait and see.

Another question you might consider is what kind of parent you want to be.

Imagine a job came along that paid more money yet consumed more of your time, keeping you away from your kids and partner. Would you take it?

Romantic partners should be united on values you hold as parents. Think of them as guidelines for how you handle decisions. Knowing what takes precedence won’t solve all your future problems, but it will help you navigate choices together.

Do you regularly practice a religious faith? Do you believe in God or other supernatural powers? If you have children, is it crucial to you that they grow up in a particular religious tradition?

Religion, or lack thereof, plays a significant role in the culture and life of a family. It defines many aspects of how families spend their time, the holidays they observe, and their fundamental view of life’s biggest questions.

One couple I know has an interfaith marriage—the husband is Catholic, the wife Jewish. They agreed they would raise their kids Jewish, which was essential to the wife, whose father was a rabbi. The husband didn’t care which religion their children had—only they had a religious community to fall back on. They raised three children and recently celebrated their 36th anniversary.

Money is one of the top reasons for divorce. Finances become such a significant issue in romantic relationships because a person’s spending constantly demonstrates their values, offering up many chances for disagreement.

For example, a person who values being independent in old age may follow a strict budget to invest in retirement. But if their partner values being adventurous and social and enjoying life in the present, they may spend money much more freely.

One study showed that couples who disagreed on finances were twice as likely to divorce compared to those with common financial values. Interestingly, the study attributes marital separation over finances to differences in “risk preferences.”

“Risk attitudes determine investment decisions, such as housing for the family,” said the study’s author, Marta Serra-Garcia, associate professor of economics and strategy at the Rady School. “If spouses have different risk preferences, they will often disagree on common and very important investments in the marriage.”

For the couple I mentioned above, the person who values being independent in old age is likely to have low-risk preferences, while their partner may have higher risk preferences.

Determining your values and how “risk averse” you are in financial decisions is an excellent barometer to measure how financially compatible you are with a partner. It enables even a spendthrift and a penny pincher to communicate and agree on a joint financial path.

Turn Your Relationship Values into Time

Just as couples can have different values related to how they spend their money, they can also differ regarding how they want to spend their time.

Quality time together—without distractions—is key to fostering and maintaining intimacy between two people. But quality time can look very different for each of you.

One of you might love the idea of a fun night out on the town together, while the other would prefer a cozy night of takeout and a movie at home. You also might disagree on how much quality time to dedicate to each other.

Having a few similar interests and getting on the same page about how much time you expect to spend together is vital in fulfilling each other’s needs.

For years, my wife and I were misaligned on how much time we should spend together. We constantly felt one of us was letting down the other, and we were giving each other the little scraps of time left in the day.

The solution for us, and many other couples, is using a timeboxed calendar. By schedule syncing, a technique I describe in depth in my book, Indistractable, you build an agreement detailing the amount of time you’ll spend together each week and an equitable split of household responsibilities.

Long-term relationships between two people can be challenging, but that’s part of what makes them fulfilling and life-affirming.