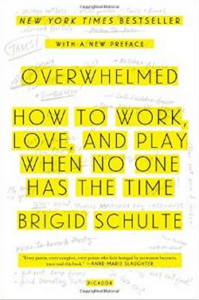 Many of us feel we’re drowning in the rising tide of emails, updates, and digital distractions. According to a survey by the Families and Work Institute, the majority of American workers report feeling overwhelmed or overworked. In her new book, Overwhelmed: How to Work, Love, and Play When No One Has The Time, Brigid Schulte acknowledges that although the deluge of to do’s is inevitable, there are ways to regain our sanity.

Schulte writes about cognitive overload, work life balance, and gender bias in the workplace. She mixes personal anecdote with psychological science to discuss the stress of day-to-day life. Primarily, she discusses how our perception of work influences how we work. Schulte insists that being overwhelmed and feeling overwhelmed are two different things.

We need to change how we perceive our workload, she says, and not just the amount of work.

The sociologist John Robinson has collected detailed time diaries, tracking what typical Americans do every day, for decades. He is interested in how much free time we have and what we do with it. The answer is not nearly as obvious as it might seem and Robinson has found our intuitions can be misleading. Robinson has concluded that our perception of how busy we are generally does not match reality.

Robinson has scrutinized thousands of time diaries and found that the amount of hours Americans work has held steady for the last forty years. What’s different, Robinson says, is the gap between what the data indicate and what people actually report. People feel busier, more exhausted, and more hurried, even if they aren’t.

When Schulte, the author of Overwhelmed, kept a time diary for one week, Robinson calculated she had about 30 hours of free time. To Schulte, a reporter for the Washington Post and mother of two, the finding sounded completely absurd. She felt overwhelmed. And yet, she had 30 hours of leisure time every week. How?

Robinson argues that much of what we consider work time is actually leisure time. Exercise, reading, listening to the news, talking with a friend on the phone, or spending time on social media – when Schulte reported her time diary to Robinson, he insisted these activities were leisure hours, even though they might not feel very leisurely. Robinson suggests the problem is not necessarily having less time to do more things – after all, the average number of hours Americans work per week has held relatively steady for the last decade – but spending more time worrying about the things we need to do.

Tip: The effects of feeling overwhelmed are determined not only by how much you work but also by how much time you spend thinking about work. Select a few hours each day to unplug the modem and set your phone on airplane mode. It’s easier to stop worrying about work when you’re unable to do it.

2. Work Less To Get More Done

Schulte recommends chunking time. Don’t work continuously and without breaks. The longer we work, the more tired the mind becomes. After a certain point, we’re lured into watching a pointless video or reading an irrelevant blog post. A sting of guilt lures us back to work, but it’s too late. The mind has checked out.

Chunking works by blocking out uninterrupted time. No email, no phone. Schulte quotes Terry Monaghan, an executive coach, who says that, “your brain can stay focused on anything, even an unpleasant task, if it knows it will last only thirty minutes.” Schulte says that she wrote most of Overwhelmed in 90-minute bursts.

Tip: Don’t attempt to work for long periods of time without a break. Instead, chunk work into short bursts but schedule time on your calendar to focus. It’s just as important to manage cognitive bandwidth as it is to manage hours.

3. Pretend You Don’t Have That Much Time Left.

Laura Carstensen is a professor of psychology and founding director of the Stanford Center on Longevity. She studies how we perceive time, exploring the difference between how the elderly and terminally ill perceive time compared to everyone else.

Carstensen’s research revealed that while most of us think about how much time we have; those nearing the end of life think about how much time they have left. When our “time horizon” is short, it’s more obvious what we should value and what we should ignore. Young people have a long time horizon, so they’re more easily distracted by trivial concerns and unimportant tasks.

The trick is “collapsing one’s time horizon,” according to Carstensen. When we think we have less time to waste, we make better use of it.

Tip: We work better when we know that we don’t have unlimited time. Work against a timer or for the brave, try a “dead battery sprint.” The technique involves leaving your power cable at home, going to a coffee shop or somewhere else where you don’t have access to your power cable, and working until your battery dies. The time pressure will boost your productivity.

4. It’s Not the Hours That Kill You—It’s the Lack of Control

As I read Overwhelmed, I thought about Kevin Roose’s Young Money: Inside the Hidden World of Wall Street’s Post-Crash Recruits. Roose writes about recent college graduates working in finance where one hundred hour workweeks are the norm. These young recruits do not actively work during every second of these grueling stretches. They idled for hours, waiting for a senior employee to assign work, which typically arrives late in the day. As one first-year analyst put it, “It’s not the hours that kill you—it’s the lack of control of the hours… my life doesn’t belong to me anymore.”

Schulte cites research from Leslie Perlow and Jessica Porter, two researchers from Harvard Business School who conducted an experiment involving a group of employees at Boston Consulting Group. The employees were allowed to coordinate time off and after-hours on-call time so they could control their workflow while still meeting the demands of their clients. Compared to a control group that remained constantly available and had less control over when they worked, employees in the experimental group produced better work, reported higher job satisfaction, and took full vacations. Perlow and Porter stress that it is, “perfectly possible for consultants and other professionals to meet the highest standards of service and still have planned, uninterrupted time off.”

The experiment was so successful that leaders at BCG created PTO (Predictability, Teaming, and Open Communication), a company-wide program directly based on Perlow and Porter’s research. PTO gives employees the freedom to control when they work so their work hours are more predictable. On their website, BCG emphasizes that “BCGers report exceptional improvements in both personal satisfaction and project performance after adopting PTO, including an average 35 percent increase in teamwork and collaboration, a 35 percent increase in value delivered to clients, and a 100 percent increase in team effectiveness.”

Tip: 8 hours of work will feel different depending how on much control you have over those hours. If you work for somebody, ask for more control of your hours. If you’re a manager, don’t blindly delegate.

In Overwhelmed, Schulte emphasizes the power of perception. Her most insightful passages explore the gap between how much time we spend working and how much time we feel like we spend working, suggesting that even though we might not be able to magically reduce our responsibilities at home and at work, we can change how we experience and perceive our work. We have more free time than we think, but given our hurried lives, we would never guess it.