It’s How You React to Failure that Matters: Why Ego is the Enemy

Nir’s Note: This guest post is an excerpt from my friend Ryan Holiday’s new book, Ego Is the Enemy. Ryan is the author of three other books and his monthly reading recommendations, which go out to 50,000+ subscribers, can be found here.

It can ruin your life only if it ruins your character. 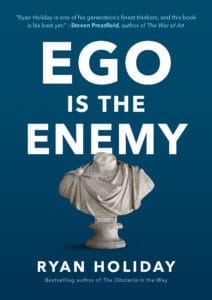 John DeLorean ran his car company into the ground with a mix of outsized ambition, negligence, narcissism, greed, and mismanagement. As the bad news began to pile up and the picture was made clear and public, how do you think he responded? Was it with resigned acceptance? Did he acknowledge the errors his disgruntled employees were speaking out about for the first time? Was he able to reflect, even slightly, on the mistakes and decisions that had brought him, his investors, and his employees so much trouble?

Of course not. Instead he put in motion a series of events that would end in a $60 million drug deal and his subsequent arrest. That’s right, after his company began to fail—failure almost exclusively tied to his unprofessional management style—he figured the best way to save it all would be to secure financing through an illegal shipment of 220 pounds of cocaine.

Sure, after his publicized and very embarrassing arrest, DeLorean was eventually acquitted on the charges on the rather implausible argument of “entrapment.” Except he is on video, holding up a baggie of cocaine, saying with giddy excitement, “This stuff is as good as gold.”

If only he’d stopped. If at any point he’d said: Is this the person I want to be?

People make mistakes all the time. They start companies they think they can manage. They have grand and bold visions that were a little too grandiose. This is all perfectly fine; it’s what being an entrepreneur or a creative or even a business executive is about. We take risks. We mess up.

The problem is that when we get our identity tied up in our work, we worry that any kind of failure will then say something bad about us as a person. It’s a fear of taking responsibility, of admitting that we might have messed up. It’s the sunk cost fallacy. And so we throw good money and good life after bad and end up making everything so much worse.

Let’s say the walls feel like they’re closing in. It might feel as if you’ve been betrayed or your life’s work is being stolen. These are not rational, good emotions that will lead to rational, good actions. Ego asks: Why is this happening to me? How do I save this and prove to everyone I’m as great as they think? It’s the animal fear of even the slightest sign of weakness.

You’ve seen this. You’ve done this. Fighting desperately for something we’re only making worse. It is not a path to great things.

Take Steve Jobs. He was 100 percent responsible for his firing from Apple. Due to his later success, Apple’s decision to fire him seems like an example of poor leadership, but he was, at the time, unmanageable. His ego was unequivocally out of control. If you were John Sculley and CEO of Apple, you’d have fired that version of Steve Jobs too—and been right to do so.

Now Steve Jobs’s response to his firing was understandable. He cried. He fought. When he lost, he sold all but a single share of his stock in Apple and swore never to think of the place again. But then he started a new company and threw his whole life into it. He tried to learn as best he could from the management mistakes at the root of his first failure. He started another company after that too, called Pixar. Steve Jobs, the famous egomaniac who parked in handicap parking spaces just because he could, responded in this critical moment in a surprising way. Humble for CEOs convinced of their own genius, anyway. He worked until he’d not only proven himself again, but significantly resolved the flaws that had caused his downfall to begin with.

It’s not often that successful or powerful people are able to do this. Not when they experience heartrending failure. 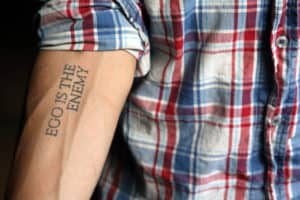 American Apparel’s founder Dov Charney is an example. After losses of some $300 million and numerous scandals, the company offered him a choice: step aside as CEO and guide the company as a creative consultant (for a large salary), or be fired. He rejected both options and picked something much worse.

After filing a lawsuit in protest, he gambled his entire ownership in the company to initiate a hostile takeover with a hedge fund and insisted that his conduct be investigated and judged. It was, and he was not vindicated. His personal life was splashed across the headlines and embarrassing details revealed. The lawyer he chose to represent him in his lawsuits happened to be the same one who’d already sued Charney close to half a dozen times for sexual harassment and financial irregularities. In the past, Charney had accused this man of shaking him down and making bogus legal claims. Now they were working together.

American Apparel spent more than $10 million it didn’t have to fight him off. A judge issued a restraining order. Sales slumped. Finally, the company began laying off factory workers and longtime employees—the exact people he claimed to be fighting for—just to stay afloat. A year later, they were bankrupt and he was out of money too. I was there and saw all of it. It broke my heart.

It’s like the disgraced statesman and general Alcibiades. In the Peloponnesian War, he first fought for his home country and greatest love, Athens. Then driven out for a drunken crime he may or may not have committed, he defected to Sparta, Athens’ sworn enemy. Then running afoul of the Spartans, he defected to Persia—the sworn enemy of both. Finally, he was recalled to Athens, where his ambitious plans to invade Sicily drove the Athenians to their ultimate ruin.

Ego kills what we love. Sometimes, it comes close to killing us too.

It is interesting that Alexander Hamilton, who of all the Founding Fathers met the most tragic and unnecessary end, would have wise words on this topic. But indeed he does (if only he could have remembered his own advice before fighting his fatal duel). “Act with fortitude and honor,” he wrote to a distraught friend in serious financial and legal trouble of the man’s own making. “If you cannot reasonably hope for a favorable extrication, do not plunge deeper. Have the courage to make a full stop.”

A full stop. It’s not that these folks should have quit everything. It’s that a fighter who can’t tap out or a boxer who can’t recognize when it’s time to retire gets hurt. Seriously so. You have to be able to see the bigger picture. But when ego is in control, who can?

When a team looks like they’re going to lose a game, the coach doesn’t call them all over and lie to them. Instead, he or she reminds them who they are and what they’re capable of, and urges them to go back out there and embody that. With winning or miracles off their minds, a good team does its best to complete the game at the highest standard possible (and share the playing time with other players who don’t regularly play). And sometimes, they even come back and win.

Most trouble is temporary . . . unless you make that not so. Recovery is not grand, it’s one step in front of the other. Unless your cure is more of the disease.

Only ego thinks embarrassment or failure are more than what they are. History is full of people who suffered abject humiliations yet recovered to have long and impressive careers. Politicians who lost elections or lost offices due to indiscretions—but came back to lead after time had passed. Actors whose movies bombed, authors who got writer’s block, celebrities who made gaffes, parents who made mistakes, entrepreneurs with faltering companies, executives who got fired, athletes who were cut, people who lived too well at the top of the market. All these folks felt the hard edge of failure, just like we have. When we lose, we have a choice: Are we going to make this a lose-lose situation for ourselves and everyone involved? Or will it be a lose . . . and then win?

Because you will lose in life. It’s a fact. A doctor has to call time of death at some point. They just do.

Ego says we’re the immovable object, the unstoppable force. This delusion causes the problems. It meets failure and adversity with rule breaking—betting everything on some crazy scheme; doubling down on behind-the-scenes machinations or unlikely Hail Marys—even though that’s what got you to this pain point in the first place.

At any given time in the circle of life, we may be aspiring, succeeding, or failing—though right now we’re failing. With wisdom, we understand that these positions are transitory, not statements about your value as a human being. When success begins to slip from your fingers—for whatever reason—the response isn’t to grip and claw so hard that you shatter it to pieces. It’s to understand that you must work yourself back to the aspirational phase. You must get back to first principles and best practices.

The only real failure is abandoning your principles. Killing what you love because you can’t bear to part from it is selfish and stupid. If your reputation can’t absorb a few blows, it wasn’t worth anything in the first place.

Excerpted from Ego Is the Enemy by Ryan Holiday