Nir’s Note: This guest post is written by Max Ogles. Max writes at MaxOgles.com about behavior change, psychology, and technology. Sign up for a free copy of his upcoming e-book, “9 Ways to Motivate Yourself Using Psychology and Technology.” 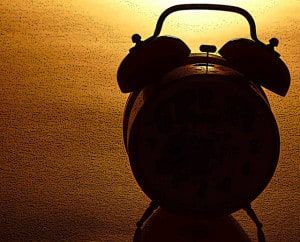 A commonly quoted and incredibly scary stat reveals that 9 out of 10 people who undergo heart bypass surgeries as a result of poor health are unable to change their habits, even with their lives on the line.

We’ve all failed at something, though luckily most of us don’t face death as a consequence. Here’s a short list of some of the good habits I started, only to eventually fail:

Thankfully, these failures didn’t have any significant consequences attached to them. My life would be slightly better if I had kept them up, but even without them I can be pretty happy and content.

But the thing that bothers me is that each time I felt that these were good habits, firmly in place; I had done them consistently for fairly long periods of time before I failed. I had mastered self control, exercised willpower, and shaped my life with these new productive routines, but each time the final outcome was a miserable regression back to the status quo.

So what the heck happened?! The reason these good habits failed for me, and the number one reason people give up on good habits generally is that they just aren’t enjoyable.

It’s a simple truth: you are less likely to continue doing something that you do not enjoy. Here’s some proof.

Earlier this year, researchers completed a simple study about work “burnout.” First, they asked 154 undergrads to complete a series of word puzzles. Depending on your personality, “word puzzles” might sound like the 10th circle of hell, or maybe it works you up into a giddy, border-line embarrassing excitement. The researchers accounted for this by asking students, “How enjoyable do you think this task will be?” then they set them to work on the puzzles.

The results were impressive: the students who enjoyed working on puzzles performed the best when solving them. To make things even more interesting, researchers asked students to complete a simple task after working on the puzzles. The students had to squeeze a “grip exerciser,” the spring-loaded contraption used to strengthen your hand. Researchers then proved that the students who enjoyed completing the puzzles were also less fatigued, and were able to squeeze the grip for a longer period of time.

Regarding the experiment, researcher Paul O’Keefe said, “Engaging in personally interesting activities not only improves performance, but also creates an energized experience that allows people to persist when persisting would otherwise cause them to burn out.”

(This research has some limitations, namely that it was for a short term assignment rather than habit formation over time. I did find two other research studies that confirm a direct correlation between enjoyment and adherence to a habit. Find them here and here.)

That Makes Sense, But So What?

If you enjoy doing something, naturally you’ll be more likely to do it. This is practically common sense. But let’s say I’m trying to create a new habit, like running daily, and it’s really not something that I innately enjoy. How will I get myself to run every morning? I’ll convince myself that it doesn’t matter if I enjoy it, because I have the willpower to achieve anything (cue superhero music). I’ll gut it out, forcing myself to run with the “no pain, no gain” mantra, enduring agony as I run each day. And that’s a mistake.

In the second part of the experiment, all of the smokers watched the movie Coffee and Cigarettes, and they were offered rewards to refrain from smoking. In this scenario, researchers found that the group that believed they had “high impulse control” was actually more likely to give in to the temptation of smoking!

Remember, neither group actually had higher willpower–random assignment made it so that the groups were relatively the same. But one group thought that they had higher willpower, and that led to them overestimating their abilities. As soon as we begin to rely too much on willpower and overestimate our self control, that’s when we’re most vulnerable to fail.

The same pattern held true for each of my failed behaviors. For example, I worked for months to adjust to waking up early, always forcing myself out of bed even though I hated it. I reached the point where I thought I had mastered it, and that’s the point when I failed.

Eventually I read an article from accomplished personal development blogger Steve Pavlina, entitled, “How to Wake Up Feeling Totally Alert.” Steve’s premise is that if you feel terrible when you wake up and have to work extra hard to get out of bed in the morning, you’re doing it wrong. Waking up early should be something that you enjoy and look forward to. If you teach yourself to enjoy the habit, you won’t even need to rely on willpower because you’ll be excited to do it.

The more I thought about my failed habits, the more I realized that I really didn’t enjoy any of them; I did them to be productive and often felt good afterwards, but initiating the process was always painful. As I diagnosed my failed habits, I came up with this matrix: 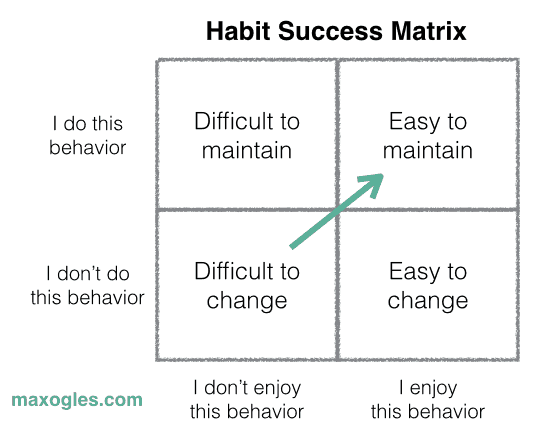 During the months that I woke up early, I had the good habit of waking up, but didn’t enjoy it; every day was painful. I was stuck in the top left quadrant of the Habit Success Matrix, which made the behavior “difficult to maintain.” If I had found a way to make it enjoyable, I could have moved to the sweet spot, the top right quadrant, and the behavior would have been easy to maintain.

Instead, my willpower and desire slowly drained until I eventually gave up.

The moral of this story? Focus on making new behaviors enjoyable. If you’re trying to start a new behavior and you find it enjoyable, it will be easy to change and make it a habit.

How Do You Make Things Enjoyable?

Full length books can be devoted to answering this question, “How do you make behaviors enjoyable?” so I won’t promise a solution here. Instead, I’ll stick with one simple idea that I’ve seen over and over in different forms. Nir has written about this principle–he calls it a “Minimum Enjoyable Action,” MEA for short. It’s a tried and true principle of behavior change: when you start a new habit, stick to the absolute simplest action possible. The idea is that if you start with an incredibly simple action, you can slowly add on to it to create behavior change.

In the words of habit blogger Leo Babauta, “Make it so easy you can’t say no.” Much of the pain and agony we experience as we try to engage new habits comes from self imposed expectations. We tell ourselves, “I have to go to the gym every day or I’m a failure,” or “If I eat one dessert, my entire fitness plan is ruined.”

By focusing on the simplest possible action, we guarantee our success and make it much easier to progress over time to build good habits. Trying to eat healthy? Start by eating one piece of lettuce. Just one. Do that every day for a week, until you feel ready to work yourself up to another piece of lettuce. Your body and mind have time to adjust, and it will be much easier to learn to enjoy your new habits instead of forcing yourself into something you simply can’t enjoy.