The Power of No

Nir’s Note: Is “no” the most powerful word in the English language? In this guest post Chikodi Chima explores the power of no and what happens when people say, “No.” Chikodi is a former VentureBeat staff reporter who helps startups with their public relations and marketing. His blog is PR Tips For Startups and he is @Chikodi on Twitter. 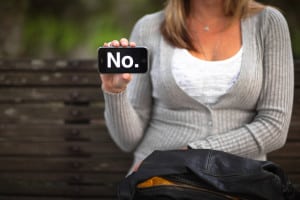 Sirens were beautiful creatures from Greek Mythology who lured sailors to their death.  The power of their song was so irresistible it would cause captains to steer their boats into the rocks and drown. We are also seduced daily by ideas that sound great at first, but may leave us shipwrecked, unless we have the power to say no.

Investor Marc Suster recently warned about the perils of shiny new objects.”Everything you say “yes” to is incrementally one more thing to support and you die a death by a thousand cuts,” he says. “I strongly believe that your success will be more defined by what you choose not to do than by what you choose to do. Of course what you choose to do has to be meaningful, timely, valuable, prescient and high quality.”

Michael Hyatt says there are three common responses to people who ask us to do things we don’t want to:

Personally I’ve always felt that being asked to do something was a measure of your fitness and status. But some people will ask anybody when they need something, because they know there’s no loss in being told no.

Tim Conley of The Foolish Adventure recently wrote about how self-doubt prompted him to say “yes” too often. “I let those fears manifest into taking on too many projects so I can’t do them to their fullest,” says Conley. ” A little here. A little there.” And as a result Conley says he finds himself in the 15 percent of businesses that are doing ok, but not great. Better than the 80 percent of businesses that are failing, he says, but far from the five percent that are crushing it, and where he has been in the past.

Saying no is saying yes to freedom

Having the confidence and foresight to say no makes you stand out. When you have clear goals it’s easier to say no. “I’m actually as proud of the things we haven’t done as the things I have done,” Steve Jobs said at the 1997 Worldwide Developers Conference. “Innovation is saying no to 1,000 things.”

There are lots of good ideas out there. None are better than your own, well-executed plans. We often say yes instead of no when we doubt ourselves and our intentions. When we say no to requests we free ourselves to work on the things we value, not what other people think is important. And that’s part of the power of no.

No is powerful because it’s rare

There will always be great new opportunities. The better you are at what you do, the more people will want you. The more you say no, the more you reinforce your value.

But saying “no” can sometimes mean “Not right now.” Instagram founderKevin Systrom turned down a personal offer from Mark Zuckerberg to be one of Facebook’s earliest employees. This move could have cost him hundreds of millions of dollars. But Systrom believed in his own vision, and that staying in school was the right move for his future. As luck would have it he was right, and Facebook later bought his company for more than enough money to put any regrets to rest.

People want to be liked. We don’t want to offend. Rather than saying no, we’d rather string people along and hope they get the message some day. But nothing is more clear than stating our intention. It shows respect, self-worth, and conviction. No is about you and no one else.

The more clear our goals become, the easier and more powerful each no becomes. Saying “no” takes practice, and it may backfire, but to me it’s the ultimate sign of maturity.

There are 1000 things you will need to say no to in your life. Some may be hanging over your head right now. Don’t wait! Unlock the power of no.

Note: This guest post was written by Chikodi Chima.