A recent New York Times op-ed, titled “Stopping the Manipulation Machines,” derided the use of dark patterns: design tricks that push people to do things online by confusing or deliberately inconveniencing them.

Kudos to the writer, Greg Bensinger, a member of the Times’ editorial board, who does a laudable job calling out obnoxious dark patterns.

His first target is the Amazon Prime unsubscribe process, which he calls “a labyrinthine process that requires multiple screens and clicks.”

Bensinger claims Amazon deters customers from canceling their Prime subscriptions with a confusing series of steps involving many more screens and clicks than the effortless sign-up process that got them paying $119 per year when they signed up.

The dark pattern Amazon uses is called, “the roach motel,” so named because like the insect trap, people check in but never check out. It’s an example of an unethical design practice because the right thing to do would be to make it as easy to cancel a subscription as it is to start one.

Having written two books on how tech products get us Hooked, I was very familiar with this technique.

I was surprised, however, to find the New York Times uses the very same dark pattern it derides to prevent its own subscribers from canceling.

Even more intriguing is how this sort of unethical design happens in all sorts of organizations, the Times is just the latest example.

I’ll first explain how the paper uses the roach motel to keep customers from unsubscribing. Then, I’ll dive into how these sorts of ethical lapses happen at corporations and what companies can do to prevent using dark patterns.

Signing up for a NYT subscription is easy—with just a few clicks, anyone can sign up in seconds, without having to interact with a representative.

But canceling your subscription? That’s another story. Take a look at everything I had to do to unsubscribe:

First, I had to find where to unsubscribe, a process taking at least three screens after logging in and accessing my account. 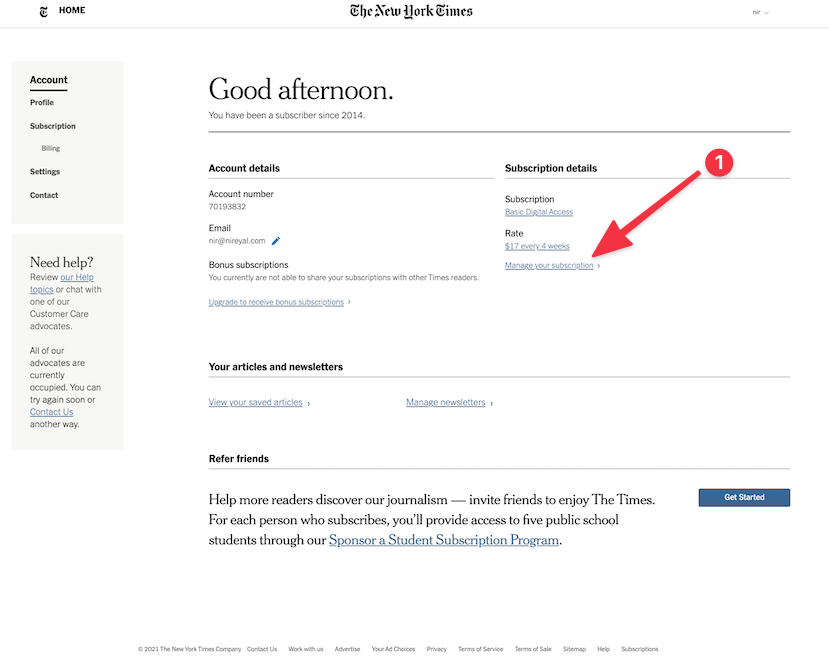 Then, once I found the right buttons to click, I had to either call to speak to a representative (but only during the specified business hours) or use the online chat function.

Already the process of unsubscribing was more time-consuming than the original sign-up, but here’s where the Times uses an intentionally sticky user interface to get customers to stay.

Since it was later than the specified business hours, I had to use the chat function. I knew I’d forget to call later, so I went ahead and clicked on the “begin chat” option. Little did I know this would lead to a several-minute negotiation with an agent who tried to convince me to stay.

I told the representative I wanted to cancel. Then I was offered reasons not to. I responded with “no thanks” each time. Then, I waited for the representative to reply and come back with several rounds of offers to get me not to cancel. On and on, the process went until I was finally allowed to leave. While it took seconds to start the subscription, it took several minutes of back-and-forthing with the representative to cancel—classic roach motel.

Of course, I did eventually get to my desired result, but that’s not the point.

Dark patterns don’t completely prevent an action; they slyly tax our cognitive resources and eat up our time so we become more likely to do what the designer wants.

Why does the Times do this? Simple—they know it makes them more money.

Why do they keep doing it despite a member of the editorial board calling out the practice? That’s a matter of company culture.

Bad ethics is a symptom of bad company culture

The cringeworthy hypocrisy illustrated by the Times is an important case study in how companies adopt unethical design practices.

I’d bet the author never attempted to cancel his subscription. How would he know the company was using the same tactics he railed against?

Thousands of people work at The New York Times, and the team responsible for this cancellation workflow is likely in the single digits. It’s a blip on the radar at a big company; the manipulative tactic is not some evil scheme or conspiracy among the NYT staff.

Most likely, someone who specializes in conversion rate optimization (CRO) simply followed the numbers to the “optimal” workflow, and it might not even have occurred to them that they created a dark pattern.

That’s why it wouldn’t be fair to criticize Bensinger individually, or even the New York Times as a company. At many big companies, the left hand does one thing while the right hand does another.

The bigger the company gets, the harder it is to see everything that’s happening. Unfortunately, that includes unethical practices that in this case can lead to the company putting its proverbial foot in its mouth.

Will the Times change?

Now that one of the Times’ own writers has helped expose this unethical design practice, the company should clearly remove this dark pattern.

But how does an organization avoid unintentionally using dark patterns or other coercive design practices?

Waiting for regulators to tell companies exactly what they can and cannot do risks ham-fisted legislation that limits innovation. It also puts the onus of companies to wait to be policed rather than doing the right thing right now.

I humbly propose the regret test.

When building any tool, the designers can ask:

If people knew everything the designer knows, would they still take the intended action?

In this case: If people knew what it would take to cancel, would they still subscribe?

My guess is that a significant number of potential customers would opt out.

Many might be fine with the Times’ roach motel, but the question for the company is how many people objecting is too many? If only half of your customers are okay with the design, while the other half are miffed by the dark pattern, that’s clearly too many. Companies should set a minimum bar for passing the test.

If users would regret taking the designed action, the technique fails the regret test. Such techniques shouldn’t be built into the product since they coerce people into doing something they wouldn’t do if they had full information.

When building any tool, designers should take the regret test. Find out how. #RegretTest Click To Tweet

So, how do we tell if people regret using a product? Simple! We ask them. Companies test possible features all the time. It’s called usability testing.

The test wouldn’t necessarily require much added effort or cost. In a recent article, Jakob Nielsen of the Nielsen Norman Group wrote that he believes usability test results can come from testing with as few as five people.

The regret test is well worth the resources if it helps weed out unintended consequences, putting the brakes on undesirable design practices before they go live to millions of users.

The future of design is unregrettable

Nearly all companies, including The New York Times, would like to earn and keep users’ loyalty and trust. Ignoring ethical design, or worse, chiding others while using dark patterns yourself, turns customers against the company as people vent their frustration online to others, warning them not to do business with the company.

Like many people, I’ve uninstalled distracting apps like Facebook from my phone because I regret having wasted time scrolling through my feed instead of being fully present with the people I care about. Wouldn’t it be in Facebook’s interest to alter their product so people like me don’t abandon it? Likewise, it’s in The New York Times’ best interest to know that their cumbersome cancellation design repels people from subscribing or coming back after they cancel.

If any company, be it Facebook, The New York Times, or another business, doesn’t listen to users who increasingly resent it for one reason or another, it risks more people ditching its service altogether. Ignoring people who regret using your product is not only bad ethics; it’s also bad for business. Product leaders who listen, on the other hand, will find that their users value their work more than ever.