Note: This article was first published in Forbes 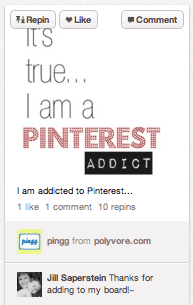 Last week, I sat down for drinks with a few friends.  “Have you heard of this Pinterest website?” said Jonathan, “My wife is totally addicted.” “Yes! Molly is hooked too,” said Ben, “She even has her grandmother into it, who, by the way, still can’t figure out Facebook.”  “What’s Pinterest?” said Colin, the unmarried engineer.

My friends, the very definition of tech-savvy, couldn’t understand the astounding success of Pinterest.  For one, the idea of capturing photos on a virtual wall is nothing new.  The Facebook newsfeed is 5 years old and searching for pretty pictures on Google Images is ancient.

And yet, the Pinterest juggernaut is growing faster than Facebook when it was this size.  Investors recently plowed in $27 million only five months after the company raised its previous round of financing.  But even those who believe Pinterest is onto something big may not really understand why.

Pinterest has what I call an “obvious secret”, the kind of insight that creates breakaway non-consensus companies.  An obvious secret is when a startup has discovered a deep insight about its users, which is not obvious to the outside world, but is the key to the business’s success.  However, to those who do not know this insight, the company appears to be little more than a novelty.

Pinterest wants its users to do three things:  consume, create, and share content.  The more users consume, create and share, the faster Pinterest reaches its business objectives and dominates its market.  To accomplish this, Pinterest has mastered the art of minimizing cognitive load, in other words, reducing the mental effort required to do what the site wants users to do.  Reducing cognitive load is what good design is all about.  Making something simple makes it easy to understand, easy to use, and ultimately increases the desired behaviors.  Here’s how Pinterest accomplishes its business goals through simplicity:

A Pin Is Worth A Thousand Posts

By nature, images are much easier for our brains to process than text.  Thus, a site, which characterizes and organizes content through pictures, is inherently easier to understand and use than text-based service.  Even Twitter’s 140 characters require more brain cycles than the quick-browsing of visual information on Pinterest.  Consuming information through images is easier, which means users consume more of it than ever before.

The value of Pinterest is in capturing and collecting inspiring scraps of the web.  The site taps into our primal hardwiring to hunt and gather.  We want to keep things that make us feel good and we like knowing they are kept somewhere safe; like a treasured shoebox full of life’s memorabilia.  Through its browser bookmarklet, “re-pin” button, and ability to invite contributors, users collect items onto “boards” they’ve labeled based on their interests.  Common boards include recipes, kids and fashion.

But in the process of collecting and categorizing, Pinterest users are in fact creating content.  Though they have done little more than clicked on an image to identify it as interesting, their collective pinning creates tremendous value for the community.  In an age when web content is infinite, curation from people whose taste you admire and interests you share, is extremely valuable.

Because each user is motivated to find things that interest them, content curation is an invariable by-product.  But in the process, the sharing and collection of information occurs in a powerful new way with broad implications and new opportunities.

In the process of collecting items of interest, users share their tastes and preferences in a much richer way than competitors such as the Facebook “Like” button can hold a thumb to.  This is because users never have to think to “Like” anything, once again reducing their cognitive load through simplification.  The behavior of pinning, intentionally simplified and de-cluttered by its designers, only enables users to do one thing, save their content. 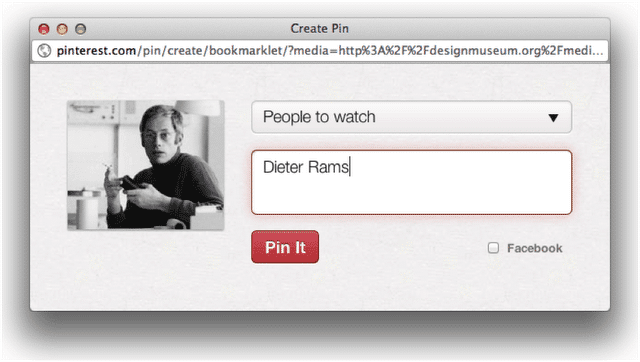 Pinterest’s obvious secret is its ability to serve our innate desire to capture and collect, while making consuming, creating and sharing easier than ever before.  In the process, Pinterest is on the precipice of having the richest consumer data set ever assembled and may someday be able to predict what consumers want well before they know themselves.

Note: I have no affiliation or investment in any company mentioned in this post.