What Is, and Is Not, Your Product’s Job 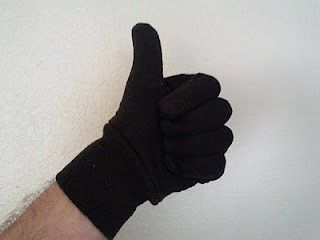 Recently, my mom came for a visit.  She read my blog and discovered her son has a crazy habit of running barefoot.  After some convincing, she begrudgingly accepted my rationale, especially after I showed her that a nice Jewish professor at Harvard said it’s ok.

But on one morning, as I was about to walk out the door, my mom stopped me with a tight grab to the arm reminiscent of my childhood.  “It’s bad enough you run outside with bare feet but you look ridiculous running with these cheap shmatte gloves.”  She always had an eye for spotting the quality of apparel and she correctly identified my Wal-Mart bargain bin gloves, which I bought for $2 per dozen.

“Why are you wearing these things?” she exclaimed.  “You must be cold!  Let me get you a nice pair of warmer gloves. You’re cold, right?  Is that the reason?”

She tried again.  “It must be a fashion thing then.  The kids are not wearing shoes on their feet but they’re wearing gloves on their hands.”  This time she was sure she’d deduced the reason.  “So at least let me buy you some nice quality gloves from Bergdorf.  You want to be in with the times, I get it.  Is that the reason you wear gloves when you run?”

“I know, it must be to hold your key so you can get back in the house after you run.”   She said, with a worried expression.  “Don’t worry I’ll be here to let you in.  But while you’re gone I’ll sew you a little pocket inside your gloves to hold your key.  The reason you run with gloves is to hold your key, right?”  This time she took her conclusion as fact and held out her hand expecting me to turn over the gloves.

“No mom.  It’s SNOT!”  I said.  “I run with these gloves because of the snot.”  She looked at me perplexed and disgusted.  “When I run in cool weather, my nose drips and I use these cheap gloves so I don’t have to wipe my nose on my hands or carry a handkerchief.”  Realization began to sink in.  “When I get home, I can just throw them in the hamper and use a clean pair the next time I run.”

After a pause she said approvingly, “That’s a smart boychick.  Always keep your nose clean.  Now run along.”

Clayton Christensen says people don’t just buy products and services, they hire them for a job-to-be-done.  In this case, I hired my gloves for a very specialized, non-obvious, and yes, kind of gross job; but it demonstrates a point.

Startups seize opportunities big companies can’t act upon because they see the world though the jobs-to-be-done lens.  Christensen says, “Most organizations are already organized around product categories or customer categories, and therefore people only see opportunities within this little frame that they’ve stuck you in.”  He continues, “There are a lot of people who hire consultants to tell them how big the market is. And because the data is organized in the wrong way, you start to believe that’s how the market should be organized.”

When you see innovation through the confines of current solutions for pre-defined customers, innovation grinds to a halt.  But thank goodness big companies are so bad at innovation.  If they were any good at it, where would startups be?  It took outsiders like AirBnB, Dropbox, and Zynga to disrupt industries because big companies only saw the current customer segments, not the job that could be done for new potential customers.

The first step in the art of building a company is understanding customer motivation.  Unless you deeply understand the job your customer is hiring your product to do, you may be surprised to learn what is, and is snot, the reason to buy your products.