Nir’s Note: In this guest post, Ryan Hoover, Director of Product at PlayHaven, utilizes my thinking on the “Habit Zone” to shed light on where Turntable.fm fell short. Ryan blogs at ryanhoover.me and you can follow him on Twitter at rrhoover.

Remember Turntable? When it first launched in May of 2011, the music service seemed to own the internet, growing from zero to over 420,000 monthly active users (MAU) only two months later1Turntable initially required Facebook to login and use the service. According to AppData, Turntable’s usage peaked at approximately 420K monthly active users in mid-July, 2011..Unfortunately, that growth didn’t last long as many of its early adopters ditched the service. It is now estimated to have only 20 – 50,000 MAU’s, a fraction of its early peak.2AppData estimates just over 50K MAU’s for the month of February. In comparison, Compete estimates 20,375 MAU in January.

As I described nearly two years ago, much of Turntable’s success was due to its well-executed social engagement loop; however, that wasn’t enough. So what went wrong?

Turntable failed to create long-lasting habits3Nir defines a habit as “a behavior that occurs nearly or completely without cognition”.,leaving it vulnerable to competitors who more quickly became a daily part of users lives. Nir Eyal, a researcher on habit design and blogger at NirAndFar.com, posits that habits form when users have a high perceived utility and use a product frequently. The most sticky products are used multiple times a day. How often have you checked your email or Twitter feed today? In other words, users need to value the product and use it often to form lasting habits and enter the “habit zone” as represented by the graph below.

One of the most common complaints about Turntable is its demand for attention. It is both its greatest strength and weakness.

Unlike traditional music services, Turntable is designed for social interaction where users listen to music together in real-time. Everything takes place in a virtual room, filled with head-bobbing avatars and DJ’s carefully curating their playlist. Users express their love or disgust for the music by up or down voting tunes while exchanging quips, debating song selection, and conversing through a chat feed. However, this interactive experience requires additional brain cycles that users often can’t afford. Music is largely a background experience, consumed alongside other primary activities such as working, running, or driving. In comparison, services like Spotify and Pandora are easy and far less demanding. Once Turntable’s novelty faded, its users returned to less obtrusive, “lean back” experiences that didn’t interfere with their day-to-day activities.

And that was Turntable’s fatal flaw – its infrequent usage compared to other competitors4It’s no coincidence that Turntable’s gradual decline in mid-2011 was also around the same time as Spotify’s U.S. launch.due to the additional effort involved in using the service. If we are to assume users value both services equally, those used more frequently become the habit and take dominant position in the user’s mind. 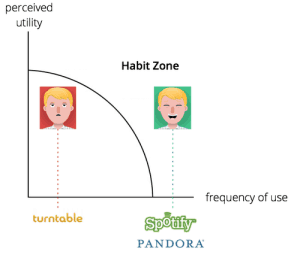 Habit formation is becoming increasingly important as not only a competitive advantage, but a bar for entry. All products, even those creating new markets, are competing against existing habits and habits are hard to change.

Habits, or a lack thereof, killed Turntable.5I use the word “kill” superfluously. Turntable is an awesome service and I enjoy the occasional jam session but there’s no arguing its decline.