Angel or Devil: Who’s Really Investing In Your Start-Up? 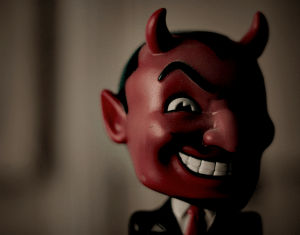 This article originally appeared in the Harvard Business Review

A friend called me heartbroken, crying. She had spent months looking for investors to fund her fledgling startup and now she had a big problem. Someone was ready to give her the money.

Trouble was, the cash came with a catch. The only investor willing to pony-up the money was someone she didn’t like. She also got the feeling he did not like her much either, and yet, he wanted to invest. “If he was involved, I have the feeling I would quit my company down the road,” she told me over the phone.

Time was running out, she needed the funds and with no other investor ready to commit, she feared she’d have to take the money from someone she couldn’t stand. The very thought made her sick in the stomach.

I felt for her and her dilemma piqued my curiosity. What differentiates a great early-stage investor from someone no entrepreneur wants to take money from unless they absolutely have to? I wanted to know what separated angel investors — those who add value to a company — from devil investors — those who destroy it.

Last month, famed investor and Sun Microsystems co-founder, Vinod Khosla, shocked a tech conference audience claiming, “… 95 percent of VCs add zero value. I would bet that 70-80 percent add negative value to a startup in their advising.” Can Khosla be right? Can investors be a liability rather than an asset?

“I don’t know a startup that hasn’t been through tough times,” Khosla said, and it is during these rough patches that he believes many investors fail their companies. But there are more ways an investor can screw a company than giving crummy advice.

A classic Harvard Business Review article demonstrates how investors can negatively impact the psyche of startup founders, often with toxic, long-lasting repercussions. The paper’s authors, Manzoni and Barsoux, describe a disorder they call the “set-up-to-fail syndrome.” Though they focus on how this affects the manager-to-employee relationship, I believe the affliction can also manifest in the context of an investor-to-founder partnership, particularly when a first-time entrepreneur is involved.

What is this sabotaging syndrome? It begins innocently enough. The chain reaction usually begins with the “tough times” Khosla says are part of every company’s lifecycle. Sometimes the investor has pre-existing doubts about the CEO’s abilities, but the infection usually starts when the company misses a minor target or isn’t progressing as quickly as anticipated.

When things do not go as planned, many investors increase supervision of the company and its CEO. The investor’s doubts in the founder begin to show in subtle cues like body language and tone, as well as in not-so-subtle ways like sending emails asking for more frequent progress reports. The investor may also initiate lengthy discussions, wanting to know how the company intends to get itself back on track.

The investor’s questions are legitimate — it’s his money after all. But the byproduct of the increased scrutiny is the deterioration of the founder’s confidence and creativity. The entrepreneur suspects the investor is losing faith and responds by overcompensating in an attempt to fight the investor’s perception.

The CEO may start working at an unsustainable pace and demand the company’s employees do the same, squandering mindshare and team morale on unnecessary tasks to placate the investor. Fearful of further disappointing her patron, the CEO may unintentionally paint a rosier view of the company or stop asking for critical feedback.

As the founder shares less, the investor interprets the CEO’s closing-up as an inability to surface problems — a sign of poor judgment and a lack of competence. The investor becomes increasingly frustrated and is now convinced that the CEO requires further oversight.

But as Khosla admits, investor’s ideas are often crap and with so much attention focused on what the investor thinks is best, the company misses real opportunities.

As the study’s authors point out, “Perhaps the most daunting aspect of the set-up-to-fail syndrome is that it is self-fulfilling and self-reinforcing — it is the quintessential vicious cycle.”

Taking cues from the more experienced investor, the first-time CEO begins doubting her own abilities. She begins performing her job mechanically, avoids risk-taking and spends more time and energy catering to the investor’s requests. The CEO’s self-doubt fuels poor performance, validating the investor’s suspicions and throwing the company into a self-perpetuating death-spiral, which leaves the once-promising CEO dazed, confused, and often times, out of work.

The tragedy of the syndrome is that it is fueled by good intentions. The founder wants nothing more than the company to succeed and the investor has no intention of destroying value in a company he’s invested in. But according to Manzoni and Barsoux, how people with power react in times of trouble can have a considerable and often deleterious impact on others.

But the set-up-to fail syndrome is preventable and reversible. Both entrepreneurs and investors can take steps to vaccinate themselves from the disease.

When my friend faced the unfortunate choice between an investor she did not want to work with and the potential death of her fledgling company, she had a difficult decision to make. In her case, she decided to keep looking for other investors, believing that starting a company with the wrong person was worse than not starting a company at all.

But merely finding a good angel investor is not good enough. Angel investors can become devils when conditions bring out the unintended behaviors of well-meaning people.

An antidote to the syndrome is acknowledging how people in positions of authority influence the performance of others. Whether it involves investors, bosses, or managers, any supervisory relationship can fall prey to a breakdown of confidence. Investors must beware of the trap of labeling founders as deficient people and instead stick to judging objective outcomes and circumstances.

Next, expectations about the degree of supervision should be set early in the relationship. Companies that institutionalize regular dialogues between hierarchies can head-off the syndrome before it gets out of control. A similar practice can help CEOs and investors get along. There are many ways to open the gates to better communication — a topic several Bay Area startup CEOs and investors will discuss here.

For their part, company founders can prevent the onset of the syndrome by understanding its potential impact and guard themselves from the performance drains that come from the downward spiral.

The set-up-to fail syndrome can only continue if the CEO perceives that the investor is losing faith in her abilities. Ultimately, founders and investors are on the same team and both want the company to thrive. Therefore, regardless of what the devil investor may say or do, the startup CEO must perform a bit of mental acrobatics to keep her sanity.

If the perception of disappointing an investor is getting in the way of guiding the company, the entrepreneur must choose another point of view. Founders must ward-off the demons of self-doubt by never interpreting investor’s actions as, “You are failing,” but rather, “I want us to succeed.”

Both founders and investors can take steps to prevent the potential unwinding of their relationship and their company. The investor must be aware of his role in shaping the CEO’s actions and serve as a trusted advisor rather than an overseeing elder. Meanwhile, the entrepreneur must inoculate herself by not allowing negativity to thrive, choosing instead to view the investor as an ally rather than a watchman.

In my own experience having worked with several fantastic investors, it was always the great ones who not only had insight, but also the humility to confirm that the company CEO knew best. Even during the company’s tough times, interacting with real angels leaves entrepreneur energized, confident, and more creative than before.