How Apps Can Shape Your Future Self

Nir’s Note: This guest post is written by Jeni Fisher, a London-based Googler who consults startups on applying behavioral insights to achieve business and user goals.

Early on in my role as an Apps partner manager at Google Play, I was drawn towards the Self-Improvement apps space because their persuasive influence transcends screen-level interactions. Their mission is to persuade people to take real-life actions that lead to long-term behavior change and ultimately shape how they live their lives.

Read on to discover how these companies are harnessing behavioral insights to bridge people’s intention-action gap and work towards the ‘future self’ they seek to be.

1. Make the first session a success

For self-improvement apps, the first step to addressing people’s gap between intentions and actions is to ensure that the first session sufficiently activates people top the crucial in-app behaviors. If we’re not sufficiently activated to experience the benefits of the app in the first session, we’ll likely churn and uninstall. Retaining users over the long-term is tough, but one of the best ways to mitigate this is to optimize the first session so that new users understand and take the core in-app behaviors fast. The Mindfulness app revamped their onboarding from several screens to a new flow that elevated the ‘core action’ of getting started with a meditation session. By implementing this Android material design ‘quickstart model’, week-2 retention increased from 19% to 33%. The takeaway? By increasing the likelihood of activating users on day one, your entire retention curve will shift up over time.

2. Plan for the next session

The first session is your best opportunity to ensure retention-driving triggers are set up. Without these, that first session won’t lead to a second and the likelihood of a behavior getting adopted is slim.

Let’s imagine someone installs a language learning app because they really want to learn French. They are far more likely to actually learn French if they willingly set a plan of how/where/when they will carry out the behaviors that help achieve this goal. There are dozens of studies citing that planning the how/where/when of a desired behavior, an implementation intention, makes it more likely that people will take action.

The Healthy habits app The Fabulous has taken on board this growing body of behavioral science research and implemented a Commitment Contract feature accordingly. People are asked to fill in a commitment contract where they indicate exactly when and where they will accomplish the desired action, for example taking a walking meeting to exercise more during the day. And in one specific study about implementation intention, people who filled in the contract were 20% more likely to follow-up on their plan. 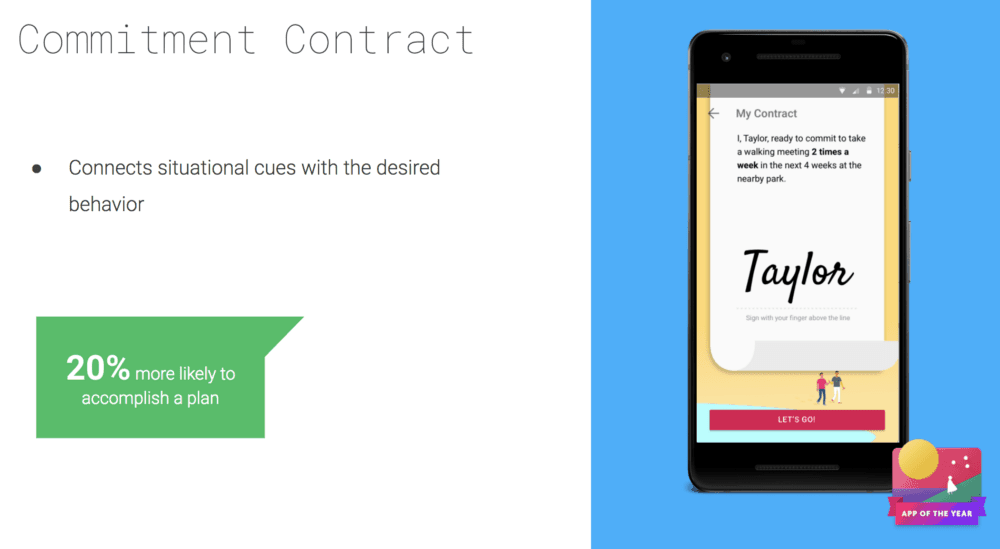 The Fabulous implemented a Commitment Contract feature to boost the likelihood of someone adopting the desired behavior.

Another powerful technique is to encourage new users to set up a daily reminder so that they actually use the app a second time; at a time/day of their choosing. Push notifications that have been directly set by people at times that work for them work better than generic marketing prompts because they’re aligned with our own self-selected intentions. Live class app Yogaia tested the implementation of a new Daily Reminder feature, and found that new sign-ups who activated the daily reminder feature were 48% more likely to attend a class within the 1st week! Going beyond a specific time of day, there’s a wealth of smartphone data that can equip developers with true user awareness by taking into account a wealth of other data points. Developers can tap into services such as Neura’s AI software to transform smartphone data into insights about user activities in the physical world.

Neura’s AI predicts when someone is likely to wake up, and this is especially important for use cases such as fertility awareness apps. Their full potential is only tapped into when a user measures her temperature as soon as she wakes up. By integrating the Neura SDK, fertility awareness app My Days was able to tailor prompts to when a user was most likely to have just woken up. These personalized smart reminders vastly outperformed the previous generic prompts, with a higher % of women taking their temperature as a result. 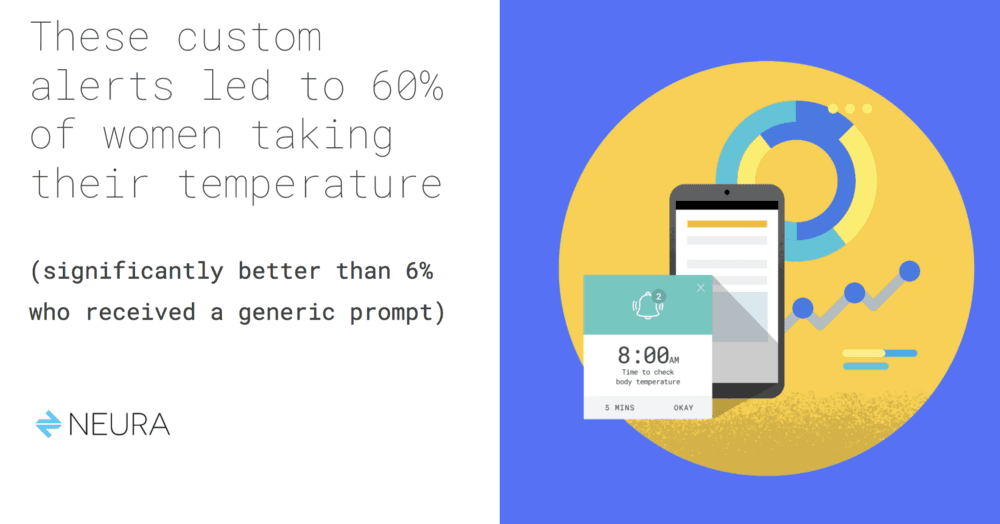 So your first session sets the user up for success. You’ve ensured that future behavior is planned or contextual cues are set up to remind people to act. That’s still not enough to close the gap and ensure people take action! There also needs to be a real sense of the benefits of engaging with the product over time. This is particularly challenging for self-improvement apps, as when it comes to investing in your future self, benefits are typically not experienced for months. To keep people on track, apps can foster commitment by ensuring users experience some form of a reward from day one. So, as soon as you complete one of your habits in the Fabulous app, the app asks you to take some time to celebrate. This is inspired by behavioral research that says if people take time to tap themselves on the back, they will associate a good feeling with the habit and start looking forward to it.

This challenge is greater for businesses who monetize via subscription, where the key benefits of using the app tend to be behind the paywall. Google Play recently partnered with The Behavioural Architects, a behavioral science insight consultancy, to identify how key behavioral economic concepts might better convey the paid benefits of a subscription app. You can read the Medium Post detailing the key findings of the study, or download the white paper.

So how do you ensure motivation levels don’t lag in those crucial first few weeks? A popular motivational design technique is awarding a run streak for consecutive days of usage, helping to boost motivation and making it more likely that intentions lead to a habit being formed. The extrinsic reward of building up a usage streak can be super powerful, but can backfire and demotivate if implemented incorrectly. Yogaia added a daily run streak on the service to boost the motivation at the point when they had not done a proper activity-based segmentation: it worked well on the already very active users that could easily maintain the run streak. However, it punished their largest segment of class attendees, who would attend 1–3 time a week, with a run streak of zero. In the end, they opted to show the cumulative number of classes and hours attended so that the number could never go down). Perigee’s Seven Minute Workout app strikes a balance between offering in-app rewards for habitual usage and the sense of failure that an ‘all or nothing’ streak tactic can manifest if you have a long streak built up.

If you miss a day, you miss one of three of your earned hearts, but don’t lose months of progress in one go. There will inevitably come a day when you’re not able to carry out the behavior, and losing one of the three hearts makes use of the motivational power of loss aversion but avoids the demotivation and likely abandonment that a complete loss might cause.

Encouraging people to start a new behavior is, in some ways, the easy part.

At its most simple level, initiating a new behavior based on expectations about future outcomes. The harder part is encouraging them to maintain it. AJ Rothman’s Theory of Behavior Maintenance suggests that continued maintenance of an adopted pattern of behavior is contingent on people being satisfied with the outcomes they have obtained. If they don’t perceive outcomes, they will break the new habit. This theory inspired Smoke Free’s implementation of their progress dashboard. The dashboard helps people see that they are making progress toward their smoke free goal by providing feedback on time smoke free, money saved, health improvements made and so on.

Also, when A/B testing their Daily Missions feature, Smoke Free found that people were twice as likely to have quit smoking after three months. Why? Because it encourages people to reflect on the benefits they’ve gained from quitting smoking.

Investment is of course a key component of Nir Eyal’s Hooked Model and over time, users will have invested significant data and non-transferrable progress within your product. Self-improvement apps have a real opportunity to better visualize this investment, so that people are less likely to abandon their new behavior (and the product). Language-learning app Busuu recently introduced a progress dashboard on their user profile. This highlights their progress against short and long-term goals, and quantifies prior investment in the app via the number of words learned. It’s positively impacted their Day 7 retention rates already.

It might seem like the path to long-term behavior change and habitual app usage is a a simple series of chronological steps. But in reality, it’s more a series of stages.

To help people reach their goals, the nutrition and lifestyle app Lifesum wanted to know the answer to the following question; “what does it take for a person to change something?” To do this, they conducted a huge research effort, interviewing people who had recently succeeded or failed in a behavior-change attempt. They surveyed their user base and evaluated models of behavior change, mapping both to their internal data. What did they learn?

1. People move through a series of stages when modifying their behavior. These stages (Contemplation, Preparation, Action, Maintenance) lie at the heart of the Trans-theoretical Model of Behavior Change.

2. These stages correlate with how different people interact with different features in the app. For example, people contemplating a lifestyle change might initially just browse meal plans. People in the preparation stage might be more likely to take the in-app Health Test, while users who are ready to take action actively track their meals.

3. People arrive at different points of their journey when they first install Lifesum, but the research also confirmed that that people moved through the stages in different ways. Importantly, lapsing to an ‘earlier’ stage wasn’t a sign of failure but an almost inevitable part of achieving long-term, behavior change.

What did they do next?

Prior to the research effort, onboarding emails weren’t tailored to a users’ readiness for change. However, by presenting each stage of change in the email and its related features, their onboarding email rates more than doubled. For users who were clearly in the ‘action stage’, these targeted emails increased open rates by a further 37% and doubled click-through rates.

The framework also enabled Lifesum to better match the in-app interventions accordingly with the users’ individual journey and readiness for change. The research effort confirmed that we all need support throughout our changing journeys, regardless of who we are, and Lifesum is now doubling down its efforts to help people succeed with this key takeaway in mind. The habit trackers were prominently surfaced to users who were clearly on earlier stages of readiness for change, and this led to a 40% uplift in D7 and D14 retention rates. Engaging users on the preparation stage with the health tests increased weight loss success by 20% too!

The positive impact that self-improvement apps are having on people’s habits and routines raises some exciting questions. What are the untapped opportunities for businesses to help persuade people to act in ways that they INTEND to act? How can you proactively take the concept of implementation intention, or a better understanding of your own readiness for change, to take control of your own personal goals?

Please share your thoughts on the examples listed above, and don’t miss my talk with the co-founder of The Fabulous, where we discuss related insights that can help business boost retention!

Nir’s Note: This guest post is written by Jeni Fisher, a London-based Googler who consults startups on applying behavioral insights to achieve business and user goals.