The Link Between Habits and User Satisfaction

Nir’s Note: In this essay, Ryan Stuczynski and I discuss the relationship between habits and user satisfaction. Ryan was the Director of Analytics at Fab and today leads growth for theSkimm. Follow Ryan on Twitter or Medium.

In the company’s first quarter earnings call, Facebook CEO Mark Zuckerburg told Wall Street investors, “almost 63% of people who use Facebook in a month, will use it in a given day.” He continued, “another stat that I think is actually quite interesting is we track how many people use Facebook not just every day … but what percent of people used it 6 days out of 7 days of the week. And that number, for the first time in the last quarter, passed 50%. So, that’s pretty crazy, if you think about it … more than 50% of people have used it 6 days out of 7 days of the week, almost every single day of a week.”

What Zuck is calling attention to is the fact that not only are a lot of users visiting Facebook on any given day, but more importantly, over half of them use Facebook almost every day. Mark’s right, that is “pretty crazy” indeed.

There’s an adage in the television industry that TV viewers have the mental bandwidth for just 12 to 15 channels. After that short list, few other channels matter to most viewers. The same can be said of mobile apps.

For most of us, there are the frequently used apps on our home screens and then there are all the rest on the second, third, fourth screens. As Nir has written previously, “In a world of ever-increasing distractions, habits matter.”

Given consumers limited bandwidth and the challenges of changing user behavior, habits are the key to delivering long-term engagement.

On to the fun stuff …

Let’s take a look at a few of the largest mobile  apps — Facebook, Twitter, Instagram, Snapchat, and WhatsApp. The data below is from paid surveys conducted using Google Consumer Surveys. In order to minimize the noise in the data, only respondents considered to be regular users were included, which in this case meant using it at least twice per week.

For the purposes of this study, the Net Promoter Score is used as a proxy for user satisfaction and the standard NPS question, “How likely are you to recommend [app name] to a friend?” was asked. The survey was limited to American adults over 18 years of age and 8,000 responses were collected.

Frequency of Weekly Use 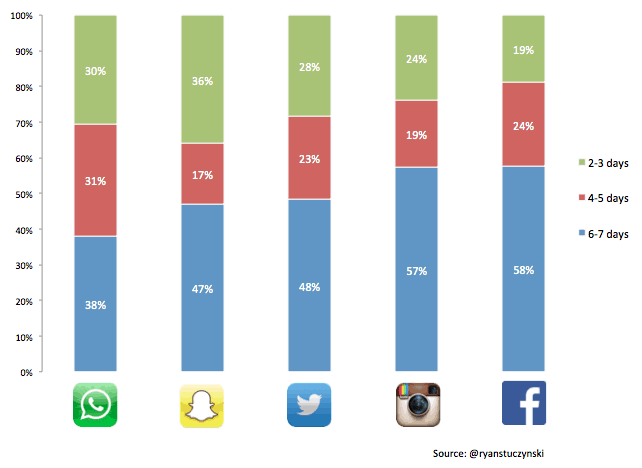 To help qualify the data above, if the once per week users were included, the percentage of users using Facebook at least 6-7 days a week would have been 48%  —  roughly in-line with the global number Zuck referred to in his investor call.

Net Promoter Score by Frequency of Use 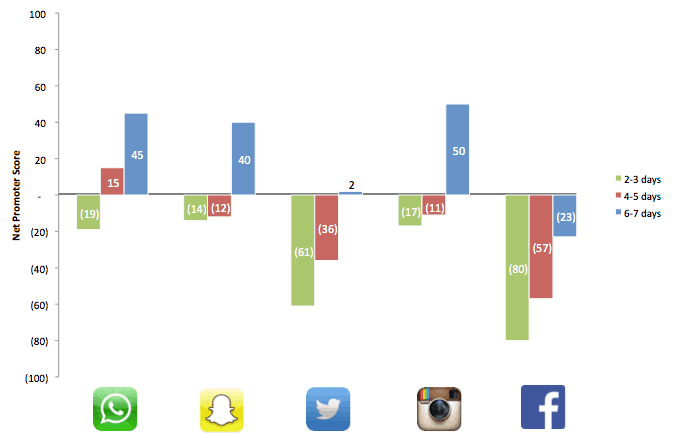 You can see by the chart above that there is a clear relationship between app usage and NPS scores. The more days per week the app is used, the higher the NPS of each app across the board.

Why do Twitter and Facebook have negative Net Promoter Scores? One reason may be that people are less likely to recommend more established apps since they know their friends already use Twitter and Facebook. Nonetheless, even for these two apps, the more days per week someone uses them, the more likely they are to say they would recommend it. 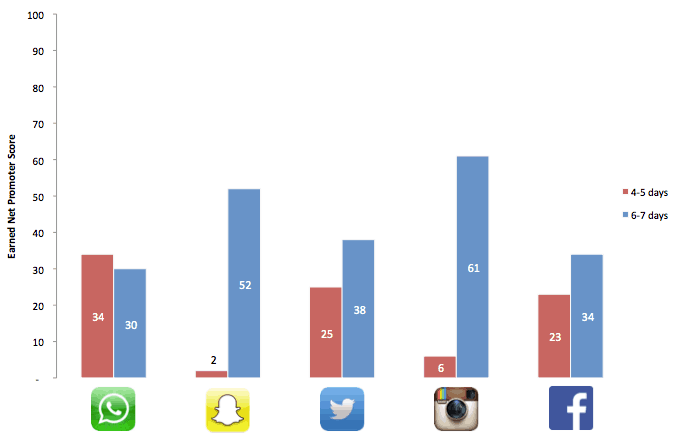 Why might the daily habit not boost NPS for WhatsApp? Well, if your core capability is delivering images and video as entertainment, as is the case on Snapchat and Instagram, perhaps giving a daily fix is very important. However, if WhatsApp is used primarily as an SMS replacement, users may not need the app to entertain them as much as to connect them to others. WhatsApp is arguably less emotionally impactful and serves more as a communication utility than a daily routine.

The Value of Habit

When considering how important viral and word-of-mouth growth can be to helping companies dominate a market, understanding which users are most likely to recommend the product to others becomes a strategic asset. By recognizing the value of user habits, companies can leverage the loyalty of their happiest customers.

To put a value on habits, Nuzzel CEO Jonathan Abrams, pointed out recently,  “We asked investors … how many other apps or services they used several times per week, that were not yet worth at least $1 Billion, and the answer was always a very short list.”

Note: This essay was co-authored by Ryan Stuczynski and Nir Eyal