How To Save Your Startup From The “Spotlight Effect”

Nir’s Note: This guest post is by Max Ogles, a writer and entrepreneur based in Utah. Connect with him on Twitter at @maxogles. 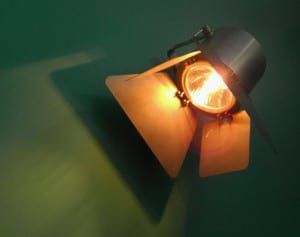 In the beginning of 2010, when daily deals site Groupon was really hitting its stride and copycat businesses were popping up left and right, a small startup called Yipit was just getting off the ground. Yipit was involved in daily deals, too, but rather than creating the deals itself, Yipit simply aggregated the deals offered by the other companies to offer a nice tidy list in a daily email.

Like any startup, the Yipit team planned PR and marketing around their launch and hoped that the buzz would yield a nice base of users, who in turn would share with friends and create steady word-of-mouth growth. They managed to secure the spotlight from a major tech publication and then rode the wave. “After months of toiling away in obscurity, you feel like you’ve finally made it,” wrote Vinicius Vacanti, Yipit’s CEO, on his blog. “People know what you’re working on now. People all over the world are now using your product.”

But all of that attention was, in reality, for naught. The end result was an unimpressive 200 active users, much lower than Vacanti expected given the size of the audience that read about the launch. For one exciting day, it seemed like the whole world knew about Yipit–until the following morning, when Vacanti and his team discovered the unfortunate truth about the spotlight: That is, it’s always brighter when you’re in it. This can result in what is known as the “Spotlight Effect”.

The Psychology of the Spotlight

Many companies have had experiences like Yipit’s. In fact, it’s easy to dismiss this story altogether, chalking it up to the woes of a fledgling, unproven startup without any traction. But Yipit’s lofty expectations and subsequent disappointment weren’t just a coincidence; they were the result of the powerful and potentially detrimental psychological effect of valuing media feedback and artificial “buzz” over the only kind of feedback that actually matters: The kind that comes from users. If a startup isn’t aware of it, the spotlight effect can occur repeatedly over time–every feature release, every redesign, ever hire–until it gradually drains the company’s employees of their optimism. Time and again, artificial buzz will belie the cricket-sounds coming from the user-base, making everyone feel like they’re a little too drunk on their own Kool-Aid. The only option at that point is to back off your devotion to the product to avoid utter disappointment–a process we colloquially know as giving up.

But positive press is supposed to buttress entrepreneurs and spread the word, right? So what is behind this spotlight effect, exactly?

How Our Brains Short-Circuit When We Get Attention

In the late 1990s, Dr. Gilovich and his colleagues recruited a large group of Cornell University undergrads for a simple psychological experiment. In one room, five students sat patiently at a table. In another room, one student met with researchers and was asked to put on a new t-shirt. The student could choose between three t-shirts, each with the face of a different iconic figure: Bob Marley, Jerry Seinfeld, or Martin Luther King Jr. With the new t-shirt on, the student was taken to join the rest of the group.

However, after just a few moments of being in the room–before the student could even sit down–a researcher quickly mumbled an excuse about being “too far behind to join this group…” and took the shirt-choice student back to the other room. Then the remaining students at the table completed a brief questionnaire while the student with the t-shirt answered a few questions separately. What Gilovich wanted to know: Would the student, pleased to wear a new, trendy t-shirt in front of the group, overestimate how many people noticed it?

The definitive answer: Yes. In reality, Gilovich and his team found that an average of only two of the five students in the group noticed the t-shirt that the subject had chosen. On the other hand, the students who had been segregated from the group and asked to choose a t-shirt estimated on average that at least four people remembered it. In other words, they overestimated their peers attention levels by double.

In conclusion of the study, Gilovich and his colleagues wrote:

The Underlying Enemy Of Your Launch Is Self-Consciousness

The problem with over-estimating the attention other pay you– the “spotlight effect”- is that it causes us to behave in ways that are not consistent with the reality of our circumstances. Simply put, our self-consciousness derails our decision-making.

We’ve all experienced this: You spill food on your shirt at lunch. Assume that everyone will notice the stain, you spend the rest of the day avoiding social encounters to save yourself the embarrassment. In truth, it’s unlikely that anyone would notice the stain at all. Instead, they just notice you behaving awkwardly.

A startup that is affected by the spotlight effect might over think their marketing goals, underestimate the cost of acquiring customers, unintentionally craft a inauthentic brand or set unrealistic expectations–all things that result in an emotionally frustrated team. Of course, it’s possible for a company to overcome these or other missteps, as Yipit did, but that’s missing the point: time, money, and optimism are at a premium for a startup, so each small miscalculation is a step towards an undesirable fate. It’s death by a thousand paper cuts, as a company repeatedly behaves in a way that is not consistent with the reality of their situation.

The great entrepreneurs just keep building their companies. They focus relentlessly on their products, their customers, and their people. […] They just keep at it and the very best ones shut out and ignore all the noise.

How To Keep the Spotlight in Check

Is there any way to mitigate the spotlight effect? Even when we’re aware that it’s occurring, it’s incredibly difficult to prevent ourselves from overestimating the amount of attention we’re receiving. To find out whether it’s possible to mitigate the spotlight effect, I spoke with Dr. Gilovich himself. He offered three suggestions, specific to companies, that he thought would help startups maintain appropriate focus:

For a startup, capturing the spotlight from the press can be a huge advantage–it always feels good to have free publicity and third-party validation. But if all the hype inhibits your judgment and leads to poor, unfounded decisions, the spotlight effect can be the slow death of your company. In the words of Brad Feld, work to “shut out and ignore the noise” and you’ll find it easier to avoid the negative effects of the spotlight.

Thanks to Nir Eyal, Ammon Cunningham, and Ben Ogles for their feedback on earlier versions of this article.