Nir’s Note: This guest post is an excerpt from the new book Invisible Influence: The Hidden Factors that Shape Behavior, written by my friend and Wharton School professor, Jonah Berger. 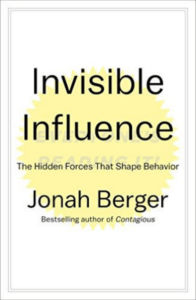 Being different, the notion goes, is the route to success. Think different was even Apple’s motto for a period. And Apple is often held up as a poster child of the benefits of this ethos. Conventional wisdom suggests that products like the iPhone and Macintosh succeeded because they were different from the rest. Steve Jobs was a visionary because he thought different from everyone else.

There’s only one problem with this advice. It’s wrong.

While the success of companies like Apple and Google is often attributed to them “thinking differently,” different ideas just as often fail miserably (remember the Segway, the Newton, or Google Glass?).  Further, Apple and Google’s biggest successes actually came in areas where they were followers rather than leaders. Apple didn’t introduce the first smartphone, IBM did. Yahoo and AltaVista were doing search way before Google was.  Research finds that almost 50% of market pioneers fail, and later entrants, or organizations that don’t enter a market first often end up being more successful.

So if being different doesn’t explain success, what does?

In the 1800s, a new innovation was introduced that had the potential to radically change transportation.  At the time, most people traveled via horse and buggy.  This was fine for shorter distances, but as cities grew, the method proved restrictive. It was slow, expensive, and even dangerous. The engine (horse) had a mind of its own, and fatality rates in large metropolises like Chicago were seven times what they are for cars today.

Gasoline powered vehicles promised a solution.  These early automobiles could go farther, faster, and even cut down on manure, which at the time was threatening to suffocate many major cities.

But getting people to adopt what we now think of as cars required a huge mind shift. Horses (and donkeys) had been the primary transportation method for thousands of years. While there were many drawbacks to this method, people were comfortable with it. They knew what to expect.  Automobiles were completely new. They required different fuel to run, different skills to drive, and different know-how to fix.

These changes required some getting used to. The first time people saw a carriage roll down the street without a horse in front, they were shocked. Rural Americans viewed this “Devil’s Wagon” as symbolizing the decadence of the city, and introduced restrictive laws to block its intrusion.  Horses, skittish to begin with, were spooked by these loud, rambling horseless carriages and prone to run away, taking their passengers careening with them.

In 1899, Uriah Smith came up with a solution.  The issue he realized, was psychological more than functional.  Even if automobiles performed better, a horseless carriage was still hard to conceptualize. 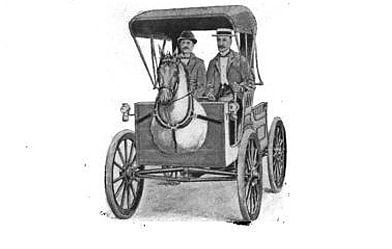 So Smith proposed something to make horses, and people, more comfortable. Named the Horsey Horseless, it involved taking a life-size replica of a horse head, down to the shoulders, and attaching it to the front of a carriage.

The buggy had the appearance of a horse-drawn vehicle, and thus horses, and their human riders, would be less likely to be scared when it passed by. The fake head also could be used as a gas tank.

It’s easy to laugh at a fake horse head glued to the front of a car. It seems silly, almost comical. But while it might seem ridiculous today, it’s hard to imagine how daunting and unconventional cars were when they were first introduced.

So rather than highlighting what made the automobile new and different, Smith did the opposite.  He made the novel innovation seem more familiar. Similar rather than different.

Smith isn’t alone. Chobani has taken the yogurt market by storm.  When they started, so-called Greek Yogurt made up only a tiny sliver of the yogurt market.  Less than one quarter of one percent. Now Greek yogurt makes up more than 50% of the market. Chobani alone claims at least half that.

It’s tempting to attribute Chobani’s success to them being different from everyone else.  But that’s just not the case.  Not only weren’t they first to market, when Chobani came on the scene Fage had already been selling Greek Yogurt in the United States for almost a decade.  Chobani succeeded not by being different, but by being similar to existing consumer tastes.  In Greece, yogurt often came unflavored in large family size containers.  But American consumers were used to buying single serving yogurt with fruit already mixed in, so that’s what Chobani offered.  They reinvigorated the yogurt market by providing a healthier take on an old favorite (single serving yogurt with fruit already mixed in).

Turns out that being different doesn’t drive success, being optimally distinct does. Offering the right blend of similarity and difference. Successful innovations and ideas aren’t identical to what came before, but they aren’t completely different either. They mix familiarity and novelty, old and new.

The Toyota Prius succeeded not by going full electric, but making a gas powered car more energy efficient. Highly successful songs blend similar melodies with new lyrics. And high-impact scientific research is often grounded in prior work with a few unusual combinations of new ideas sprinkled in. Sure there is some difference, but there is also a lot of similarity.

Successful companies, products, and ideas, then, are a bit like Goldilocks and the Three Bears. Goldilocks is always turned off by the extremes. The firm bed is too firm and the soft bed too soft. The hot porridge too hot and the cold porridge too cold. But the middle is just right.

The same pattern often occurs with new products, services, and ideas.  If something is too different, it requires such a shift in thinking or behavior that it often fails.  The Apple Newton, an early predecessor to today’s iPhone, wasn’t just a new device, it was a completely new category.  At the time, people had a hard time understanding why they needed it or how it would fit in their lives. The Segway faced similar challenges.  Supposed to be a “game changer” in personal transportation, it was so different from anything else that people didn’t know what to do with it.

But in between and it’s just right. Similar enough to what is already out there to evoke the warm glow of familiarity, but different enough to seem new and not simply derivative of what came before. Distinct, but optimally so.

Leveraging this Goldilocks Effect, or optimal distinctiveness, then is particularly important when managing innovation. When launching a new product like the Swiffer, how should it be described? Is it a revolutionary mop? A completely new cleaning category? And what about design? Should seats in driverless cars face forward because that is what people are used to, even if that is no longer required?

The same is true when introducing new ideas.  Is it better to present a strategy as completely new, unlike anything the company has ever considered before?  Or frame it as the logical progression from something being done already?  Focus on difference or highlight similarity and difference at the same time?

Just like the Horsey Horseless, successfully introducing more radical innovations and ideas often involves making difference feel familiar.  When TiVo introduced what we think of today as a digital video recorder, they had a similar challenge to the automobile. The technology was innovative and had the potential to create a completely new market. But tapping that potential required getting consumers to shift their behavior.

So to make it easier for consumers to understand the service, and help transition people from passive watchers to active content directors, TiVo designed their device to look like a VCR. A black, rectangle that sat below the TV or above the cable box, just like a regular VCR or DVD player would.

Pry open a DVR and a VCR and the guts are completely different. Digital video recorders don’t contain any film, so there was no need for the device to look anything like a VCR. It could have been shaped like a standard desktop computer, colored bright blue, or made into a pyramid.

But by using a familiar form, TiVo made people more comfortable adopting this radical innovation. By hiding the technology in something that looked visually familiar, TiVo used similarity to make difference feel more palatable.

Many digital actions today visually evoke their analog ancestors. We click on the icon of a floppy disk to save documents and drag digital files to be thrown away in what looks like a waste bin. eReaders have page numbers like physical books. Visual similarity also shows up offline.  Digital cameras were designed to resemble film cameras and Edison designed the light bulb to resemble the existing technology of the kerosene lamp. All make the different seem more similar.

That’s not to say that difference is always bad.  For incremental innovations, or ideas that seem unoriginal, highlighting differentiation helps. When Apple introduced the iMac in 1998, it featured only minor technological improvements. But from a visual standpoint it was radically different. Rather than the same old black or grey box, the iMac was shaped like a gum drop and came in colors like tangerine and strawberry. The design helped make similar technology more optimally distinct, and ultimately more successful.

For things that provide only a modest enhancement over current practice, emphasizing difference creates the needed novelty to encourage behavior change.  But for things that provide a more marked change, embedding them within, rather than distinguishing them from, existing practice speeds adoption.

Too different and it’s unfamiliar, risky, and overly complex.  Too similar and its boring, played out, and yesterday’s news. But in between and it’s just right. Optimally distinct. Maybe we could all learn a thing or two from Goldilocks.

Jonah Berger is a Professor at the Wharton School and bestselling author of Invisible Influence: The Hidden Factors that Shape Behavior. For free resources on driving sales and new user adoption, go to jonahberger.com.